The River reviews Catching Fire, the thrilling sequel to The Hunger Games 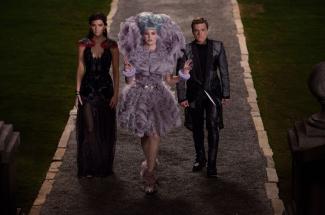 The words “the odds are never in our favour” are graffitied across the derelict walls in District 12. It’s the 75th annual Hunger Games, and Katniss Everdeen and Peeta Mellark are carted off to the Capitol for their second appearance in the arena.

The look of fear is evident in the young tributes’ faces but in fact the real fear lies in the film’s bosses. Will the highly anticipated sequel be a success? Does it live up to the expectations of both critics and fans alike?

To put it simply, yes it does. And thankfully those expectations are met in extravagant style.

Based on the best-selling sequel to Suzanne Collins’ young-adult novel, The Hunger Games: Catching Fire is the thrilling follow up to the 2011 hit The Hunger Games. Katniss (Jennifer Lawrence) and Peeta (Josh Hutcherson) thought they were safe after surviving their first bout in the arena. However, their nightmare is only just beginning.

As they embark on their victory tour, they soon realise that their stunt in the games has more disastrous consequences for the people of Panem than they would ever have imagined.

With a new director at the helm and a budget that dwarfs its predecessor, director Frances Lawrence has certainly pulled out all the stops for the sequel. There is more at risk when it comes to a sequel, and every filmmaking decision Lawrence makes is under scrutiny. Everything is bigger and more spectacular, and it needs to be – it is the Quarter Quell after all.

With any adaptation, there is the worry that the Hollywood machine is going to ruin what is a great book by leaving out the best bits and changing things for the good of the film. For once, this hasn’t happened. Apart from little things like making Peeta be able to swim for example – to “man him up” in the words of the director – the majority of the film is accurate and faithful to the book, keeping the hardcore fans happy.

The tribute parade in the Capitol is much more lavish in Catching Fire compared to that of The Hunger Games. In the story this is because it is the Quarter Quell so it has to be extravagant and grand. However, the higher budget is evident – the scale of the ceremony is staggering.  The higher budget has been used well with the special effects, with the monkey scene creepily brilliant.

Catching Fire is no Gravity in terms of it being a visual spectacle, but it is still a very good film that is worth the IMAX experience. It is a phenomenal spectacle that fully immerses you into the horror of the arena.

There is a reason why Jennifer Lawrence won the Oscar for Best Actress for her performance as Tiffany in Silver Linings Playbook. She is one of the best actresses of her generation and is one of the reasons why Catching Fire is so good. The best bit is that she doesn’t realise just how good she is.

Her performance is effortless and she makes it look easy. She truly is the girl on fire. However, it is not just her performance that is brilliant. Young Willow Shields has certainly stepped up and grown into her role of Katniss’s kid sister Prim.

Catching Fire certainly has a more mature feel to it. The Hunger Games was child’s play. This is the start of the rebellion and a full-blown war against the Capitol. There is no doubt that this will be one of the biggest films of the year. It is set to make a killing at the box office but apart from being a moneymaking machine, this, at the end of it all, is just a good old Hollywood blockbuster. So sit back and relax because it’s definitely worth it.

The Hunger Games: Catching Fire is in cinemas now.