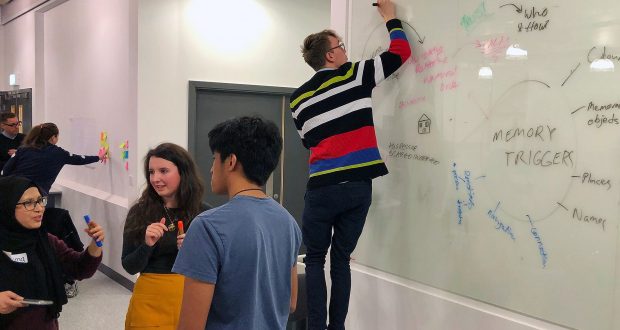 Hackers were split into nine teams to create a digital product tackling either dementia care or youth development for care home group Carebase or The Inner Strength Network, which works with girls and women on gender equality issues.

According to one of the judges, who teaches nursing and sponsored one of the briefs, Theresa Nash: “Patients living with dementia can have panic attacks, in which they forget their recent history and regress back to a time in which their spouse was alive and they lived in their own home.

“This can cause fright and confusion as they confront their immediate surroundings. The vision was for a system that helps carers provide comfort to the patient, by reconciling past and present, used either directly by the patient, or operated by the care team.”

The winning team created ‘Catalyst’, a database of memories created by the dementia patient’s family and carers, which can be projected onto a wall, to help re-orientate themselves.

They were each awarded a £200 Amazon voucher by the Enterprise Department, with the runners-up receiving a £100 voucher and every student who completed the full 24-hours a £20 voucher.

Albert Condina, 20, second year Computer Science student who was part of the winning team, said: “To be honest it didn’t feel real. 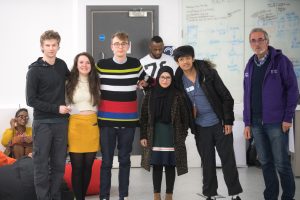 “I first came to the hackathon not knowing there was a prize for it so even if we didn’t win, I would have still enjoyed it, being able to work with such a great team was a fun experience.

“I haven’t exactly decided what I want to spend the money on yet, but I’m likely going to buy computer parts in the near future since I like upgrading my computer.”

She said: “I haven’t been involved with anything like this before so I thought I’d try it out. We jumped at the opportunity to build up the prototype we’re going to use for a different project, called through the looking glass.

“I’m really glad I took part in it, it was really eye-opening and great making new friends with different people from different courses.”

As for the extremely long day, Condina added: “I slept early so I didn’t get tired over the 24 hours.

“I could pretty much nod off if I sit on one of the bean bags really. Probably the first thing I’m going to do when I get home is shower and climb into bed.”

The panel of judges consisted of alumnus Oliver Jones, chair of governors David Edmonds, Leslie Vernon of the Royal Borough of Kingston, and Theresa Nash, Associate Professor in nursing.

David Edmonds praised the students’ commitment to the marathon event: “I’m on the board of a very large group of care homes. Some of our residents have dementia and I thought the understanding of life in the care home was absolutely brilliant.

“Some of the ideas were really moving, really impressive. You understood the loneliness. Too often you’re abandoned, it’s scary, the person you knew is now a different person.

“Enterprise is something the University needs to focus on. It’s totally beneficial to the society we live in, what Kingston is all about.”

The university has not confirmed whether they will run the event next year.