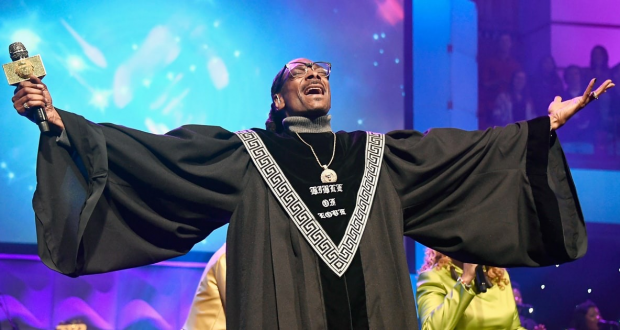 Snoop Dogg has taken yet another new approach to his image – this time by releasing a gospel-themed album.

Snoop Dogg chose to produce a good chunk of the tracks on the album.

The album also features work from a number of different people on various songs. Producers include B.Slade and DJ Battlecat.

Stevie Wonder is also credited as a song writer on the album.

Snoop Dogg Presents the Bible of Love will be released on March 16, and although it is an interesting and fresh take on the gospel genre at times, the 32-track double album is just too long to keep the listener interested.

Snoop Dogg stated in 2017 that he wanted to make a gospel album, according to Rolling Stone Magazine.

He confirmed that he would make good on his promise at this year’s Super Bowl where he performed some of the new hits.

Despite not featuring on a lot of the tracks, Snoop Dogg’s influence can be felt in the production and the tracks he does feature on are worth listening to.

Words Are Few, one of the songs Snoop Dogg raps on, is set to be the most popular as you get a real feel for his passion in making this album.

You, featuring Tye Tribbett, will be a favourite. The song arguably mixes Snoop Dogg’s traditional vibe and the new one very well. Tribbett is consistent in his delivery of the lyrics

The tracks towards the end tend to sound more of the same and repetitive although Call Me features some very smooth lines from Snoop Dogg that his fans are more accustomed too.

It is a bold approach from Snoop Dogg in this album but you feel a shorter, snappier album with just the quality hits like Call me, You, and Words are Few would have been better.

I think that from the perspective of Snoop Dogg fans and gospel music fans this is an imaginative effort and a project that respects each genre.

The tracks Love you God, Thank You Lord, and In the Name of Jesus certainly, as the names suggest, appeal more to the gospel side.

These tracks are catchy and rhythmic as one would expect a gospel song with heavy Christian themes to sound.

Snoop Dogg over the years has taken on many personas, including renaming himself Snoop Lion for a brief spell in 2010 before shortly reverting back to Snoop Dogg.

Whether he continues his new gospel approach or if this is a one off remains to be seen. The Bible of Love is a good listen if you fancy something different, but it can come across as boring.

The Bible of Love gets three out of five stars. Although the album is very lengthy, it is a very ambitious project.