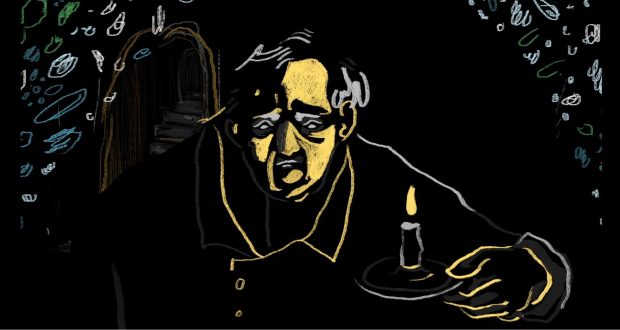 A still from the winning groups animation. Photo: Megan Wright

A group of five third-year illustration and animation students at Kingston University have won a competition hosted by book publisher Penguin Random House in December 2017.

The competition involved creating a short 30-second trailer for the upcoming book ‘The Mermaid and Mrs Hancock’ by Imogen Hermes Gowar.

The winners won £1000 and the opportunity to have their work showcased on the book’s website.

“We were happy as hell when we found out we won. We worked really hard, I mean everyone who submitted work produced amazing work, but we were so proud of what we did,” said 21-year-old Megan Wright, Producer of the winning animation.

The competition formed part of the syllabus for the illustration and animation course and was mandatory for all students to participate in.

The five students each took on different roles within the group: Reed Wiles was the director, Holly Warburton was the designer, Rowan Fitzgerald was the animator, Megan Wright was the producer and Nuryia-Ahmed Ismail took on the role of sound editor.

The groups were provided with a copy of the unpublished book ‘The Mermaid and Mrs Hancock’ to read over and develop concepts, designs, and storyboards for the book.

After groups were formed the design that fits the books concept best was chosen to represent the group.

“Our animation was an introduction to the man characters and the setting of Georgian era London,” said 21-year-old, Rowan Fitzgerald, the groups lead animator.

“We wanted to recreate the mysterious atmosphere and the sense of intrigue surrounding the mermaid from the book we were working on.”

Fitzgerald said that the biggest challenge the group faced when producing the animation was the fact that they only had 30 seconds to fit their concept.

Fitzgerald said: “We had to keep speeding bits up and cutting things out. So much of our content was cut from the final animation.”

Since winning the contest the group won the £1000 prize and has split it five ways with each member taking a portion of the winnings.

Not only did they win a fair amount of money, but they are also having their work showcased on the Penguin Random House website to promote the book and got the opportunity to meet the author of the book.

“It’s exciting knowing our work is going to be out there. I’m interested to see what people will make of it. It’s just so different showing your work to the class which is what I’m used to,” Fitzgerald added.

Penguin Random House has yet to announce when the animation will be available online, but the book is due to be released on 25 January 2018.