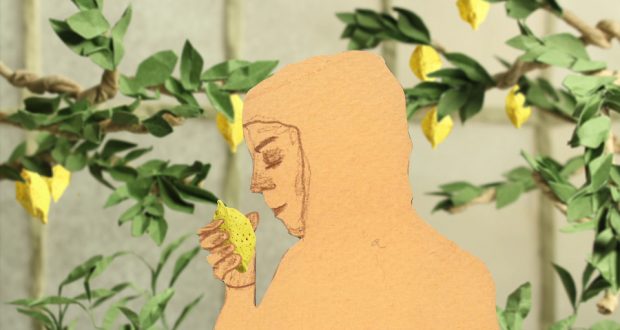 Written by Angel Pearce on November 4 2018

Two Kingston University graduates won Best Student Film in a film festival this September for their animated production focused on real-life stories of the refugee crisis.

The stop motion style animation Laymun was created by two illustration animation graduates, Hannah Quin and Charlotte Prowse, and is based specifically on the stories of two real life refugees.
Quin said: “We did months of research on the refugee crisis and the people involved and a couple of stories really stuck with us.”
One story was about a refugee family who used gardening as a form of peaceful protest, the second story was about another refugee who used lemon as a remedy for sea sickness.
The animation was created entirely out of paper and was hand constructed by the graduates.
“The story needed conveying a sense of the domestic and the fragmentation of a war zone, the textures and treatment of paper achieves this,” said Geoffrey Grandfield, head of illustration animation at Kingston University.
Quin said she found both the animation illustration department course tutors and her year group incredibly motivational, and credits the department staff as creative influences.
Grandfield said: “Laymun is an outstanding piece of work that demonstrated the power of content combined with iteration and sheer determined work to keep refining to the result that did justice to its subject.”
Quin and Prowse won the Charlotte Film Festival this September. The Charlotte Film Festival is open to established and unestablished artists to showcase their work.
The pair have been nominated for 13 awards and have won 11 including the Short Film Prize for the World of Women Film Fair, Middle East.
Granfield said: “As two young female creative voices, they have used a collective form to make something powerful and engaging and enable their voices to be heard. It’s a real achievement on a number of levels.”
The most prestigious awards the pair have won has been the Royal Television Society Undergraduate Animation Award 2018 and the Royal Television Society Judges’ Award 2018.
Both artists are currently working as freelance animators and model makers.
Quin said: “We are really excited and motivated to continue working on new projects. All the hard work pays off!”
The graduates have lots of new projects and two have recently been chosen by Vimeo as ‘Staff Picks’ as they work on expanding their audience.
Laymun has won multiple awards and is set to come out to the public at the end of 2018, before Christmas.
“Their film is a brilliant example of the outward facing, socially engaged content that our illustration animation students seek to engage with, using the power of constructed images, sound and movement to articulate narratives that are meaningful and may change the way audiences think about issues,” said Granfield.