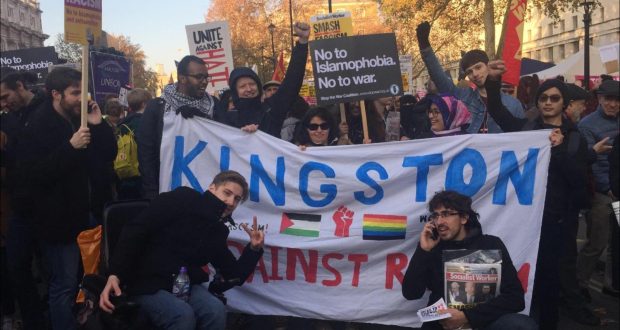 KU students march to Whitehall standing up against racism

KU students marched across London on Saturday November 17 along with thousands of others to stand up against racism and fascism.

The march, which comes after a rise in far-right activity across Britain, began at Portland Place just outside the BBC and was organised by groups Stand Up to Racism, Unite Against Fascism and Love Music Hate Racism.

Feisal Haji, a KU computer science student, said: “Right now there is a rise of the far right and I think we need to do something about this.

“If we don’t intervene and do something we are going to end up with a leader like Donald Trump. It’s our country, we face the consequences and we can’t just sit here and do nothing.”

Haji organised for the group of Kingston students to participate in the march, which nearly 20,000 attended, and said he has faced discrimination all his life.

“I have faced discrimination myself, all the time. This is the UK. I’m disabled, I’m black, I’m Muslim and I’m also an immigrant. I used to be a refugee. So, what discrimination have I not faced because of this?” he said.

“What happened during the campaign for Brexit was completely and utterly disgraceful. The way they demonised an entire section of people. Now I want to actively do my part and intervene because this is my country.”

According to Feisal the march was one of the best attended by Kingston students in recent years.

Kyrsia MacGibbon, a KU computer animation student, was sceptical of the immediate change demonstrations like this bring but said marches like this allow people to come together with others who share the same views.

“I actually don’t think I can promise an explicit change. In fact, I anticipate it might get worse before it gets better but it is the start of visibility and making a difference to at least one person who realises they do have an overwhelming public support,” she said.

international relations MA student Hayden Collins has participated in marches with Kingston before and thought the march would make a difference.

“As someone who cares about human rights and freedom of the press, I think everyone deserves to have an equal opportunity in life.

“Seeing government rhetoric supporting wars in foreign countries and encouraging policies that help create a hostile environment is just making it uncomfortable for people who have done nothing wrong,” he said.

“To see that spread across Europe at the moment and then particularly with Trump in America, which is what I am more focused on, that it is a very worrying sign. I feel like we are experiencing what happened in the run up to the second world war – and we don’t really need to go into that again, do we?”

The march, which ended with rallying at Whitehall, was backed by the TUC and Corbyn allies shadow chancellor John Mcdonnell and shadow home secretary Dianne Abbott.