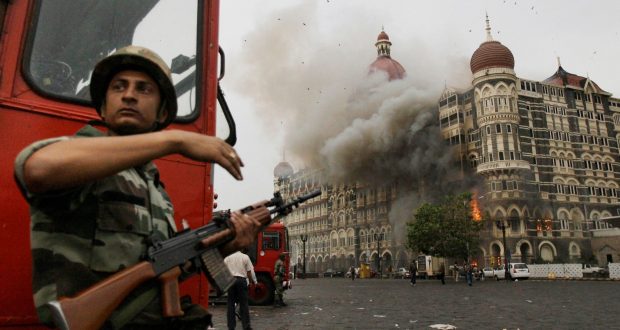 Attacks in the Taj Hotel in Mumbai. Photo: Rex Features

Written by Aradhya Gujar on November 26 2018

Loud screams, panic among pedestrians, platforms with blood stains; I had witnessed one of India’s most horrific terror attacks as I was with my family departing the last train from Mumbai’s Chhatrapati Shivaji Terminus (CST) on November 26, 2008.

With over 150 people killed during the course of three days, the terrorists had India’s financial capital to a halt and put the security forces of the south Asian nation in a vulnerable position.

Having killed 58 people at CST railway station, the Lashkar-e-Taiba terrorists then went to the city’s south and attacked two high profile hotels, The Taj Mahal Palace and Trident Oberoi where they held hostages for about three days.

The 10 attackers were known to have travelled from Karachi, Pakistan to Mumbai in a boat and had split into groups going different ways after docking in near the Gateway of India.

Mumbai was going through a rough time as the attacks of ‘26/11’ were the fourth one the city had witnessed since 2002.

As a 10-year-old, I was not sure what was happening and remember seeing frightened looks on people’s faces on the train back home simultaneously when they were all desperately trying to contact their loved ones.

We got off at an unusually deserted suburban station which would have hundreds of people if not thousands on any regular night and were struggling to make our way home with all public transport across the city being shit amid the attacks.

As far we knew, the gunmen had only attacked Mumbai’s busiest train station, only later we got the news there were explosions in two taxis and another attack carried out at Leopold Café, a popular tourist destination in south Mumbai.

Series of attacks were carried out for the next two days as the terrorists ransacked Nariman House, a Jewish community centre and killed six people including the couple who ran the place.

Miraculously, the couple’s son and his nanny escaped.

The next morning at six, I was preparing to leave for my school’s annual sports meet before I switched on the TV to see things had only got worse from what we had seen.

Just before the government had declared the city on a ‘bandh’ where all public places, schools, offices, banks etc were off for the day, most of Mumbaiites woke up to see one of the city’s most iconic landmarks was under attack.

The Taj hotel had its dome exploded by the attackers and you could see fire and smoke engulfing from the historic colonial building.

Several Members of the European parliament were staying at the hotel for an EU trade delegation who had witnessed the attack, although none of them were injured.

Lord Gulam Noon MBE was among the survivors staying in the hotel whilst visiting his hometown.

He told The Guardian in December 2008 that the terrorists were looking for people with British and American passports, and investigators believe the attack was initially aimed at foreigners.

British yachting tycoon Andreas Liveras, 73, was killed in siege at the Taj and seven other Brits had suffered injuries.

Mumbai Police, Indian military forces and the Anti-Terrorist Squad officers had successfully got the hostages out safely and killed nine of the 10 terrorists with one arrested.

The attack had shaken the Indian establishment and tensions grew between India and Pakistan with strict immigration rules applied to Pakistani nationals as well as other citizens with Pakistani heritage.

This also had an effect on sports with Indian officials banning Pakistani cricket players from participating in the Indian Premier League.

I returned to school on December 1 and came across all sorts of stories people had to tell about their experiences and there was a minute of silence held all over the country to pay respect to the dead.

While more than 20 million of India’s ‘city of dreams’ having moved on quickly, the wounds were still fresh as some of the bullet marks could still be seen at Cama hospital and Leopold Café.

Indian government had implemented special technology to track movements on Indian water after this attack but the city still suffered another deadly attack in 2011.

Explosions took place at three busy locations at rush hour killing 26 people and injuring over 100 during heavy rainfall in July with the authorities’ security concerns questioned by the public.

Despite of heavy suspicion, Indian intelligence found no links between these explosions and the attacks from 2008.

Mohammed Ajmal Amir Kasab, the arrested terrorist from 2008, was hanged on November 21 2012 at Yerwada Jail in Pune.

The news of his sentencing was loudly celebrated across Mumbai with shopkeepers and food vendors giving away free drinks at CST station for the day.

With a decade of terror attacks that the city encountered, the people have become stronger and more tolerant towards different attitudes.

Despite these obstacles, Mumbai has only moved forwards and has continued to operate as one of the strongest financial centres in the world.