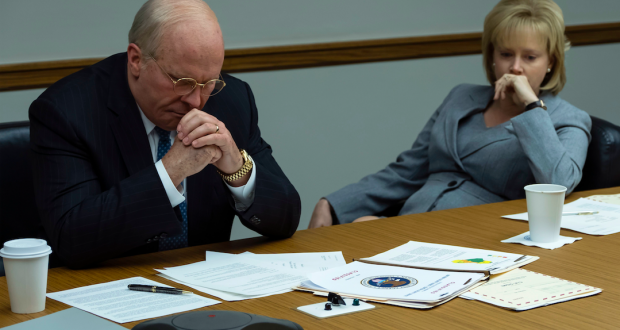 Vice: The US political story that changed the world

Written by Morgane Roos-Carreira on January 23 2019

VICE is the story of a man who goes from being a drunk to becoming the most powerful Vice President in American history.

When Dick Cheney (Christian Bale) gets fired from Yale University for loving booze more than his books, he moves back home in Wyoming to live with his soon-to-be wife Lynn Vincent and install power lines for a living.

Film director Adam McKay interrupts the younger Cheney’s sequences with splits to a much older (and fatter) Cheney during the 9/11 chaos in the White House.

Christian Bale won a Golden Globe for best actor in his role as Cheney, gaining 2.8 stone to play the controversial character.

After he spends the night in jail for drinking and driving, Lynn (Amy Adams) gives her fiancé an untimatum. She asks him to prove that she didn’t choose “the wrong man”. 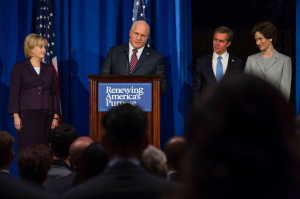 Lynn Cheney is portrayed as a resilient woman, who pushes her husband to become someone she would not be able to be, because of her gender in the seventies.

She naturally and passionately takes over her husband’s campaigning during a rally in Wyoming when he was forced to bed rest after a heart attack.

Kurt (Jesse Plemons) is the anonymous narrator, a very sarcastic man who explains key moments and people’s role throughout the movie.

Vice feels more like an educational documentary about politics than a biopic, which isn’t a bad thing.

McKay keeps his technique of interrupting the flow of the story with footage of bombings in Bagdad and other disturbing documentary-like videos, which helps us not to feel too much empathy for Cheney.

Just like in The Big Short, McKay decided to write a complex story in a mischievous way without being afraid to reveal his political views while using an exceptional cast.

Even with the lack of the Democratic Party in the movie, Mckay makes his political views very clear using Vice as a mockery towards the Republicans.

George W. Bush, played by Sam Rockwell, is represented as a weak president, begging for support and acknowledgment, under the influence of Cheney who decides to change the usual responsibilities of a vice-president and makes decisions without consulting Bush first.

The way Rockwell mimics Bush’s facial expressions, like the slightly-raised eyebrows and puppy eyes was not only hilarious, it was revealing about the former President.

Who really is Dick Cheney? What did he do? That’s the question Vice tries to answer.

The two-faced man who, on one side is a loving husband who passionately recites Shakespeare in bed with his wife in a very awkward sexual way, and a supporting father even when his daughter’s coming-out stops him from being elected.

But on the other side, the power-hungry and manipulative Cheney who took his country to war and who said during a meeting at the White House that the American Army don’t do torture, “so if the Americans do it, it is not torture”.

Cheney had a gift to speak to very powerful men and discuss the most outrageous topics and make them sound reasonable.

Well, it all started when Donald Rumsfell (Steve Carell) and Dick Cheney met during the latter’s internship at the Senate.

Rumsfell was a mentor for Cheney during his start in politics and they worked their way up to the White House together.

Carell and his contagious laugh were the perfect fit for playing Rumsfell, who was the Secretary of Defence when George W. Bush was President.

When the inexperienced Cheney asks him “what do we believe?” Rumsfell walks away laughing before slamming his office door in the intern’s face.

McKay’s cast for his main characters is not only on point, with hilarious and great actors, but also uncommon, like using Naomi Watts as a news presenter.

With the rhythmic music, the characters, the flashbacks and the anonymous narrator (even though we know what he looks like), Vice is a great movie to watch without surprisingly feeling hammered by politics but feeling a little bit more cultivated after just over two hours while having a laugh.

Out in cinemas on Friday, January 25.