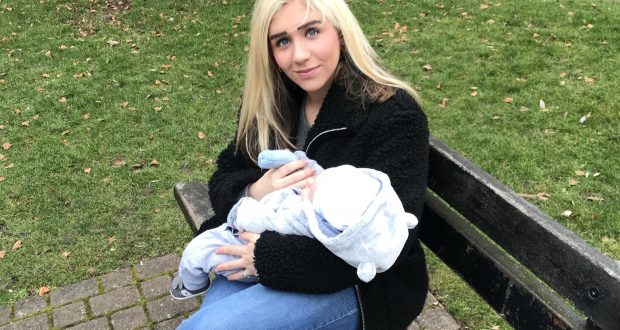 Alexa had Charlie during her second year Photo: Martin Roche

Written by Eleanor Ideson on March 8 2019

A second-year student has continued to study and take exams after giving birth to a baby boy this year.

“I found out I was pregnant two days after sitting my last exam in first year. I was only two weeks pregnant and I was so scared,” she said.

“I was worried how my parents would take it, what my options regarding university would be and for what to expect, but I was also excited and my partner was very supportive from day one.”

Although Alexa’s friends were surprised at her announcement, they have been very supportive, unlike the university in her opinion.

According to Alexa, she kept getting “passed around” from one person to another when she asked for help and support with no one giving her the advice that she needed.

“I am still angry about this. It’s like when it comes to someone falling pregnant while studying no one knows what to do or how to approach it.

A Kingston University spokesperson said: “The University offers a flexible study plan for pregnant students. Every effort will be made to accommodate a student’s pregnancy and maternity-related absence and to enable them to continue their studies.”

Alexa said: “My lectures didn’t know I was pregnant, I still think most of them don’t even know I’ve had a baby.”

“I didn’t suffer from any morning sickness but I had really bad heartburn from eight weeks until I was full term. From this I struggled sleeping so I was tired during the day, and struggled coming in,” she said.

Since having Charlie, Alexa’s attitude has changed towards university and although being a student and parent has its difficulties, she is determined to graduate.

“When Charlie gets a bit older I want him to know I’m now doing it for him. I didn’t want to go to university, but I’ve now got a reason to finish my degree. I want to give him the best opportunities in life,” she said.

Alexa mostly worked from home during her pregnancy, but has noticed herself struggling in certain lectures as she was unable to attend crucial seminars for the course.

As she goes into her third year, Alexa plans to put Charlie into nursery for a few hours each week to enable her to attend more lectures.

“A year and a half is nothing compared to how better off I will be for the rest of my life after doing this. I can ensure that Charlie has the best life I can give him,” she said.