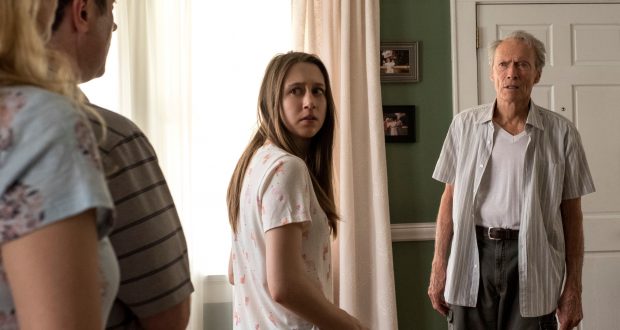 Clint Eastwood stars in The Mule

Earl Stone is a terrible person. He missed his daughter’s wedding while sitting in a bar.

He is more attached to growing flowers than he is to spending time with his family.

We shouldn’t like him. And yet Clint Eastwood’s performance as the 90-year-old gives him a kind of charm that is hard to resist, as long as you’re willing to suspend your disbelief.

When Earl’s daylily flower business goes bust and he finds himself estranged from almost all of his family, his life takes an unexpected (and maybe unrealistic) turn.

When he is approached by a man looking for “cautious drivers”, he takes the chance to earn some money and his family’s respect.

The situation escalates quickly, and soon Earl is trafficking hundreds of kilos of cocaine across state lines for a Mexican cartel, with DEA agent Colin Bates (Bradley Cooper) on his tail. Why Earlstill has a driver’s license at the age of 90 is unclear.

The Mule does not have an intellectual overtone and if you’re looking for a deeper meaning, you won’t find one.

At one point a Mexican man suspected to be the mule is pulled over.

He is terrified, but his insistence that this could be “the most dangerous five minutes” of his life is written as goofy and over-the-top.

This stab at tackling the issue of racial profiling comes off as an uncomfortable attempt at humour in bad taste.

We seem to be expected to pass off Earl’s behaviour – including racial slurs – as that of a quirky old man.

He manages two threesomes in 117 minutes, which seems optimistic even for Hollywood veteran Eastwood, who also produced and directed the film.

However, the geriatric protagonist and bizarre storyline make the film off-beat enough to avoid the overriding theme of family coming first becoming too mushy.

It was a little clumsy, lazy at times, and occasionally ridiculous but when Earl’s singing along to Johnny Cash in his dusty old pickup truck you want to be in the passenger seat.

Although I probably shouldn’t, I loved it.