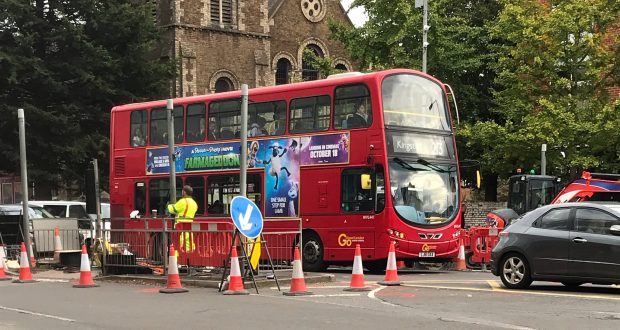 Kingston roadworks cause disruptions to students and commuters

Written by Megan Robinson on October 16 2019

Kingston University students are among those affected by roadworks that have been causing major delays and heavy traffic over the past two weeks.

The KU1 and KU2 bus services have been thrown into chaos as there have been delays of up to 50 minutes.

A twitter account named ‘KingstonUniBus’ has been tweeting updates most mornings and afternoons to inform students about the delays on the roads.

They recently tweeted: “Good afternoon Kingston. More roadworks, I’m afraid… Please plan ahead and make an earlier start for the next few days.”

First-year students are finding the delays especially hard as many of them live across campuses where the KU bus takes them to the University.

One dance student who lives at Kingston Bridge House said: “I’ve only been attending lectures for two weeks and I’ve already struggled with the buses. They are never on time, and the roadworks and temporary lights mean I am sometimes late for lectures.

“I tried to walk back to my accommodation last week after rehearsals, but I was so tired. It was a longer walk than I expected.”

Norbiton, Surbiton and Tolworth are the areas worse affected as there have been gas works, road closures and new cycle lanes put in.

A lot of buses are on diversion, and some bus stops are closed, which is also causing problems for residents.

Kingston Council update their website every week informing residents of current and upcoming roadworks and traffic. Some areas are only due to have disruptions for a week.

Other areas, such as London Road in Norbiton, have ongoing works including several lane closures.

These are expected to be completed by December 7 this year.