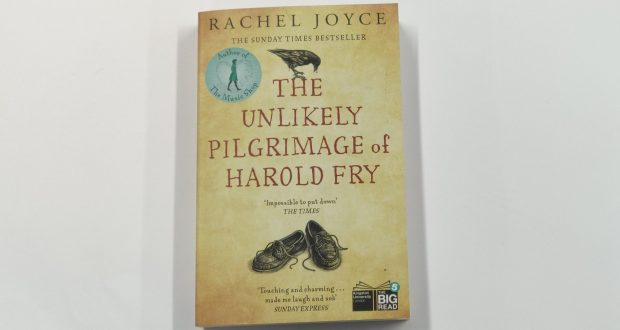 Written by Chloe Wright on November 1 2019

“I’d like to speak to a patient, please. Her name is Queenie Hennessy […] Tell her Harold Fry is on his way. All she has to do is wait. Because I am going to save her…’”

‘The Unlikely Pilgrimage of Harold Fry’ was selected as the KU big read for this academic year.

When I first heard about the book, I was a bit unsure – would I enjoy a book about a man walking?

To give you a quick answer: yes, the book was enjoyable.

The story focuses on the ‘unlikely’ walk Harold Fry undertakes to save his friend Queenie from cancer.

Along the way, he meets several characters, reflects on his past and his relationships with his wife and son.

This book was Rachel Joyce’s debut novel and follows Harold Fry from Kingsbridge, South Devon on his 466.5-mile journey to Berwick-Upon-Tweed, Northumberland.

Along his journey, we meet a variety of characters, young, old, and even fluffy.

While he is generally motivated and positive, Joyce paints Harold as very human, and so he does experience moments of doubt about his journey.

I found this an easy read with very simple language.

This is part of the criteria of the KU Big Read so that it can be enjoyed by everyone who attends the university.

This made the book start quite slow, despite Joyce’s ease in the character development of Harold.

Despite Joyce making Harold a likeable character, the reader, in a way, feels obligated to take to Harold, initially out of pity, because his relationship with his wife is so poor.

As his walk continues he becomes increasingly likeable as he realises things about himself and those around him.

He not only changes physically with all of the physical exercise and lack of places to cut his hair or shave his beard, but he also travels on a mental journey of self-discovery which is at times heart-warming, upsetting, and often humorous.

What strikes the reader hardest is the link the majority of the passers-by have with Harold – loneliness.

As he walks, he realises moments he should have been more involved in his son’s life as he grew up and Harold forms deep regret for his lack of involvement.

His loneliness is mirrored in many of the characters through most noticeably in a character called Martina.

I have given this book three and a half stars out of five as I prefer books with more complex language.

Additionally, the book was a bit slow at times, and it felt a bit repetitive with how Harold sought out reassurance to continue his journey from the people he met on his way.

Nevertheless, the book was one I would read again and had some of the best plot developments and twists I have read in a very long time.