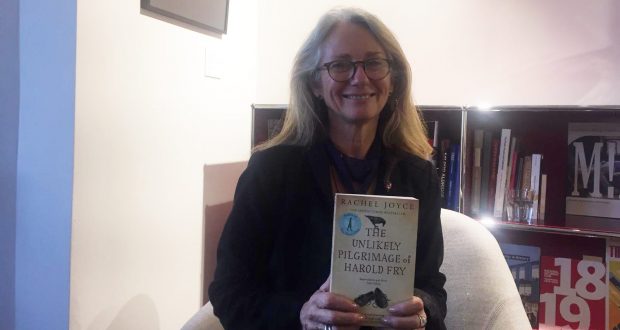 In her visit to Kingston University the author of the KU Big Read said: “It’s about being brave and making mistakes, those things all seem really important to me, and for anyone who’s starting off as a student.”

The Unlikely Pilgrimage of Harold Fry was the fifth winning book of the Big Read scheme, and Rachel Joyce visited Kingston on Wednesday November 6 to talk to students and staff about the book.

She finds comfort in reading and hopes students can too: “An imaginary world can be a very safe place to go if you feel a bit lost sometimes.”

Joyce noted the difference between lonely Harold, who is giving up on his life in contrast to eager students just starting theirs.

She said: “He is a man who initially feels he is at the end of his life. That is so different from where a new student is.”

She was flattered to have her novel chosen and thinks that the Big Read is an excellent opportunity for students.

“It gives you a sense of belonging somewhere before you’ve arrived, which I think is really important as a student.

“It’s like Harold putting on his new shoes, accepting there’s a place for you somewhere,” Joyce said.

She first began writing the novel as a radio play when she found out her father was dying of cancer; it made her want to write something for him.

Writing helped Joyce to manage her emotions and make sense of the confusion she felt: “The story was my way of dealing with my wild and complicated grief.

“The book has never replaced my dad, but it helped me to move on from a very painful place,” she said.

Joyce’s characterisation of Harold comes from her interest in people on the outside and what it must be like to be another person.

She compared Harold’s despair on his journey with her own writing experience saying there were times during the writing process where she did not know whether she could finish the book, just like Harold’s doubts in finishing his walk.

Harold is an interesting character as he crosses both physical and mental boundaries in his journey of self-discovery.

She said: “It is such an important theme to me because it’s the most optimistic thing I can think of, and it’s about hope.”

Joyce hopes the themes in her novel replicate the learning experiences of students at Kingston.