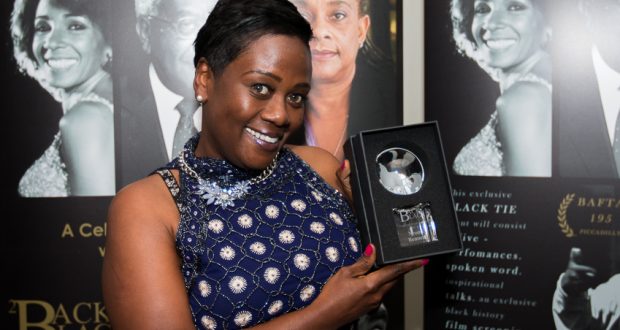 Neomi Bennett receiving one of her awards

A Kingston University graduate’s multi-award-winning compression socks are set to be made available in Europe after trials are completed.

The product, an easy to put-on compression sock called Neo-Slip, will be made available in France, Netherlands and Belgium provided the trial run is successful.

“It feels absolute magnificent, and it is so rewarding to feel like patients are benefiting from Neo-Slip… I am hoping to scale up in England and also tap into international markets,” said graduate Neomi Bennett, now a registered nurse.

Her product is currently sold in Boots stores across the country.

In July, Bennett won second place in the Pitch Palace award, an award that recognises start-ups tackling problems that impact daily lives, and is now a part of the Pitch Palace alumni, which she said is “amazing.”

Bennet created the company Neo-Innovation Limited and her product Neo-Slip to make life easier for her patients.

She said: “I noticed that a lot of older people were struggling to put stockings on because they were really tight, and that is when I came out with the Neo-slip as an idea.”

Bennett, who graduated KU in 2012 with a degree in nursing, came up with Neo-Slip socks in 2011 for an assessment where she had to look at issues in the health sector.

She entered the KU Bright Ideas competition and won in 2011, which gave her the exposure needed for her product. The NHS then contacted her showing interest in the Neo-Slip socks.

Martha Mador, head of Enterprise Education at Kingston University, said: “I am very proud of Neomi’s achievements. She has worked really hard to bring her invention to market successfully.”

Bennett said she had faced hardships while progressing with her business as others would not take her seriously because she was a nurse and had no formal business training.

“One of the biggest challenges that I had to face was the limitation of my business knowledge, and not fitting in on the stereotype of the typical business person. When I turned up to business meetings, people would look at me as if I was not welcome at their conferences,” she said.

Bennett now works at the “The Nest” which is a graduate start-up scheme at Kingston Business School.