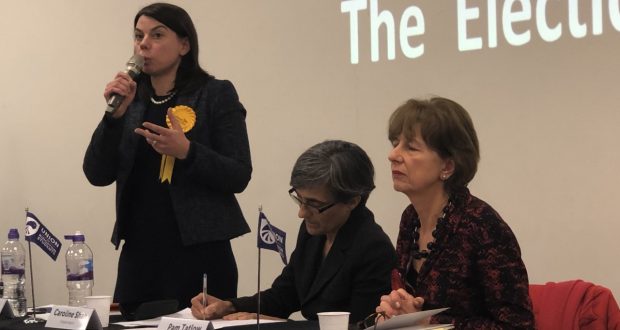 Written by Najib Hassan on December 6 2019

Politicians on both sides of the political spectrum clashed on issues including students, Brexit and climate change at Kingston University’s second election debate on December 5.

Three candidates representing the Richmond constituency presented their range of arguments and fought over key issues affecting students both nationally and locally, with the hustings being held at Kingston Hill.

On the contentious topic of tuition fees, Sarah Olney, the Lib Dem candidate for Richmond, said: “I joined the Lib Dems in 2015, long after this policy was brought in during the coalition government, but it’s important to remember that it was introduced when I was a student, by the Labour government of the time.”

“I honestly feel that policy we undertook under 2010 was a mistake, and our original intention was to scrap the tuition fees system in the first place, and it wasn’t our choice to treble the cost of tuition fees, but because of our coalition agreement with the Tories, we simply chose the idea of keeping stable government.”

Despite Olney’s apology for the Lib Dems’ move to push for higher tuition fees in the past, Labour’s proxy for its candidate, Pam Tatlow, criticised the party for its inability to challenge the Conservatives with its stance on tuition fees.

Tatlow said: “You didn’t have to say yes as a party, and I had dealings with Vince Cable when he was the business secretary at the time. He said there was no alternative – which is not the case.

Independent Caroline Shah slammed the current tuition fees system, describing the rate of six per cent interest to be a complete scandal.

Shah said: “Paying six per cent is a scandal and I believe that students shouldn’t have the burden of paying that much.”

Brexit was yet another divisive issue that proved to dominate the hustings yet again, with the Liberal Democrats being grilled on their promise of revoking Article 50 if they won the election.

Olney said: “If we were voted on as a majority government, we would revoke Article 50 as part of our manifesto, that is simple as that and we’ve been very clear on it.”

Tatlow fired back, explaining that the current impasse in Parliament is enough for a possible no-deal Brexit to be voted down with multiple parties.

“Just in the same way as Boris Johnson’s mandate stipulates his deal or no deal, we can vote it down as he has a minority government and then push for a People’s Vote,” she added.

The Conservatives’ Zac Goldsmith, currently defending the Richmond constituency, did not attend the debates, with no proxy even being sent, whilst Tatlow was sent in as a proxy for Sandra Keen, Labour’s candidate.

The Union of Kingston Students argued that the representation of Richmond’s candidates at Kingston University might change the standing of one of the most marginal constituencies in the country.

President of the Union, Feisal Haji, said: “We want the students to be able to have a say, but we also wanted to give an opportunity for the local community to speak their mind.”

“We are not an island, and I believe that showing the local community that Kingston University has some benefits to offer, and to show that our students are the future of this country.”