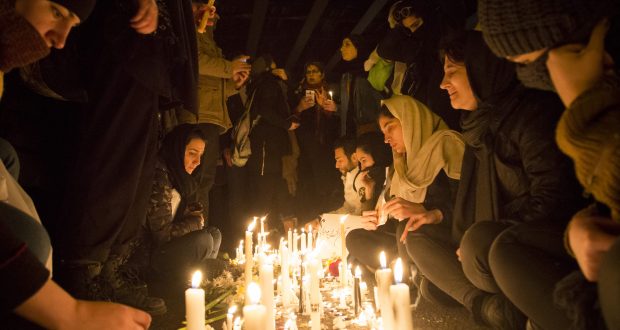 Mandatory Credit: Photo by Rouzbeh Fouladi/ZUMA Wire/Shutterstock (10523664k) Iranians light candles for victims of Ukraine International Airlines Boeing 737-800 during protest in front of the Amir Kabir University in downtown Tehran Vigils for Ukraine Airlines Flight PS752, Iran - 11 Jan 2020 Media reported that hundreds of Iranians protest in Tehran in solidarity with victims of the Ukraine plane as the Iranian military released a statement claiming that Ukraine International Airlines flight PS752 was shot down due to human error.

Iranian students at Kingston have told The River that General Qasem Soleimani, the country’s military leader who was assassinated by the US, was no hero regarding the recent crisis which has engulfed the Middle Eastern country.
The students, who wished to remain anonymous, raised their concerns with the events which have occurred since the start of the new year.

When asked about how Soleimani had been treated since his death, one of the students said: “The whole government is trying to make a hero out of him.

“The main highway was immediately named after him, and his pictures are all over the cities.

“I respect what he did for the country, but at the same time, he did some actions which caused harm to many innocent people, and you cannot ignore that.

“He was respected, but he was not a hero.”

Soleimani, who was once hailed as a “living martyr of the revolution” by Iran’s Supreme Leader Ali Khamenei, was killed by a US airstrike earlier this month which has led to significant tension and unrest between the two countries.

The General, seen as one of Iran’s most powerful men, was head of the Revolutionary Guards’ Quds Force, an elite unit which handles Iran’s overseas operations, and was suspected by the US of orchestrating potential attacks on American diplomats in Iraq and throughout the region.

With regards to the accidental shooting down of the PS752 passenger flight, which killed all 176 people on board, the same student said: “The only thing I can say is that people’s lives mean nothing to this regime. The only important thing to them is power.

“It is really disappointing that the Iranian Supreme Leader didn’t even apologise publicly.

“At first, they denied that the plane was shot down. I wonder whether if the flight was domestic, they would have even admitted it in the first place.”

The student also had a strong opinion on the President of the United States, Donald Trump, who ordered the airstrike which killed the Iranian General.

“What he [Trump] did was not something he can justify. It was an action to start a war,” they said.

“He knows that Iranians are not in a position where they can win a war. I am not on the side of my government by any means, but he killed Soleimani to show his power.

“He anticipated and saw the best moment to do this because Iran currently does not have the military power to fight back. This is why Iran attacked the US military bases but with no [reported] casualties as the government does not want its reputation to get weaker.”

Both students were also quick to raise their concerns with the current regime itself, as well as inflation, and lack of free speech already occurring inside the Middle Eastern country.

One student said: “The people of Iran are fed up with the regime for many reasons such as lack of freedom, inflation and mismanagement. A change in the regime is what they look for.”

The other student, who put attention onto the rapid change in petrol prices, said: “During the last months, prices are constantly changing. There is also no free speech or rights in the country. People started to protest, but the police shot some protesters.

“Even after what happened with Soleimani, the government used propaganda and tried to make him look like a hero.

“All over the news, everything was about Soleimani, and there was absolutely no coverage on the plane crash nor an announcement about it.”

The tension between the US and Iran is nothing out of the ordinary. Still, conflict had risen even before Soleimani’s death in Iraq as supporters of a pro-Iranian militia attempted to storm the US Embassy in Baghdad.

Trump’s decision to kill the Iranian General in Iraq, a country where US military presence has been constant since the 2003 invasion which overthrew former Iraq President Saddam Hussein, has left feelings between the US and Iran at a reeling level.

One student was quick to note their concerns for loved ones back in Iran and said: “At first it was shocking. That morning when I woke up and heard about the news, it was really alarming. I was very worried about my family and friends back in Iran.

“I know my government, and even though they are not as capable as the United States, they won’t back down.”