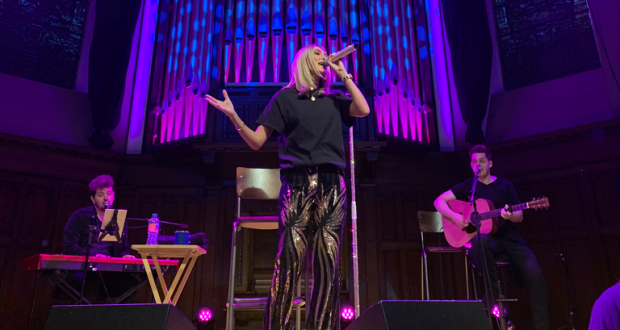 KU graduate who toured with Megan McKenna: “It’s so surreal”

Written by Catherine Poole on January 31 2020

A Kingston maths graduate swapped his calculator screen for his musical dream as he toured with Megan McKenna around the UK last year.

Ben Whisker embarked on two UK acoustic tours to play the guitar and sing with the X-Factor Celebrity winner after being recommended as a “talented guitar player” by his music producer uncle.

The 23-year-old said: “I travelled to her house and played for a minute through one of her songs. She was so happy that I got the gig there and then.”

Whisker joined McKenna on her first tour of 2019 around seven UK venues in May and June which were a sell-out success.

A second tour was announced for September travelling to a further seven venues.

“It felt quite surreal telling people that I was touring with Megan McKenna because I couldn’t get over the idea myself at first,” Whisker said.

McKenna is a singer, songwriter, and television personality who found fame on Ex on the Beach in 2016 and has since appeared on Celebrity Big Brother and The Only Way is Essex.

She boasts over two million followers on Instagram and won X-Factor Celebrity in 2019, subsequently signing a deal with Simon Cowell’s record label, Syco.

Whisker described McKenna as a “great person” and said: “She’s really fun to work with and not to mention, she’s an unbelievably talented singer.

“She’s just full of personality and nice to be around. We spent many hours on a tour bus, so we spent a lot of time together, and we’re good friends.”

Whisker hopes to continue his musical career and plans to form a band this year with his brother who plays the drums.