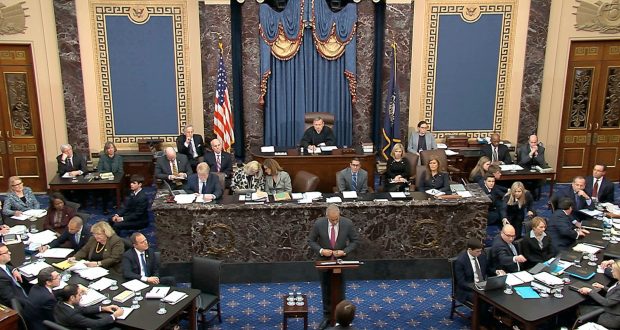 The attorney for President Donald Trump speaks during the impeachment trial against Trump in the Senate at the U.S. Capitol in Washington Credit: RexFeatures

Written by Isabella Ruffatti on February 7 2020

American KU students told The River that they would not like to see President Donald Trump impeached, despite their dislike of him – because they fear Vice President Mike Pence even more.

President Trump was put on trial for impeachment last December by Congress, and his case has since moved on to the Senate.

Noah Maunchly, a third-year illustration animation student from New Hampshire, said: “I see Trump as an embarrassment to the nation who has unearthed the worst aspects of nationalism and prejudice.” 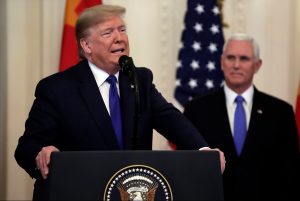 Trump is being tried on charges of abuse of power and obstruction, and a two-thirds majority vote in the Senate will be needed to remove him from office.

Maunchly, 23, does not think impeaching Trump will make much of a difference as the Senate is mostly made up of conservatives from Trump’s own party, and they will not vote against him.

Creative writing & media and communication student Rachel Domanchich said: “I don’t want him to be impeached all the way because while Trump’s an idiot, Pence is dangerous. Pence will get stuff done in two months.”

She continued: “He will do a lot of damage, whereas Trump is too stupid to do much damage… If Trump gets impeached, we’re screwed.”

Domanchich, who is from New Jersey, said that choosing between Pence and Trump was like choosing between being shot versus being poisoned and that at least with Trump, you had time to find an antidote.

The next presidential elections are in November this year, and even if he is impeached, Frazier is worried Trump could run for presidency again.

Frazier, who identifies as bisexual and queer, is also worried that if Pence came to power through Trump’s impeachment, LGBTQ+ rights would be “flushed down the toilet”.

Chase Hinton, a second-year English and creative writing student,  said: “Every president is hated and loved in their own way, and be they vilified or not, the country goes on ticking. I’ll fight for the rights I believe in no matter who’s in office.” 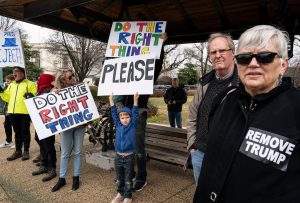 The impeachment trial of President Donald Trump brought out a small group of demonstrators, including the Sieg Family of Charlottesville, Va., left, at the Capitol in Washington
Credit: J Scott Applewhite/AP/Shutterstock

Hinton is from the southern state of Tennessee, which he describes as a place where “politics get angry really fast”, which he said is why he has tried to stay as far away from politics as possible.

He is not surprised that Trump’s road to impeachment took as long as it did.

Both Frazier and Domanchich were frustrated with the slowness of Trump’s trial, as well as American politics in general.

Domanchich said: “The impeachment was supposed to happen four years ago.”

Frazier added: “No one has patience for this. People have lives.”

Their frustration has led most of them to mistrust and even avoid news stations. Frazier, Domanchich and Hinton could not even recall what Trump was being impeached for.

Domanchich said she gets her news from late-night comedy shows rather than mainstream news outlets like Fox and CNN, which she calls “the yelling shows”.

On January 31, the Senate voted in favour of blocking new witnesses and documents from being considered in Trump’s trial.

On Wednesday night, President Trump was cleared of both charges by the Senate and will stay in the White House for the remainder of his term.

Currently, three Republicans are running for president, and Trump is by far the favourite of the trio.