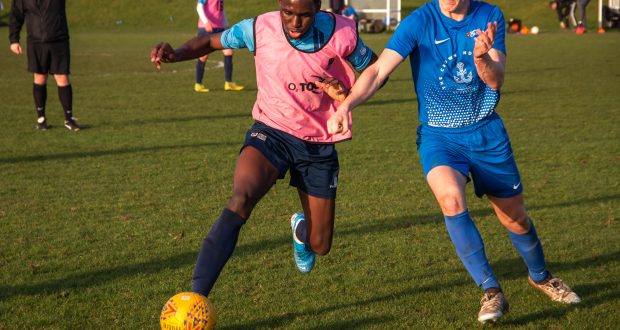 Written by Anthony Milne on February 10 2020

Kingston University failed to break down the Chichester defence as the opponent scored two goals in the second half to secure three points against Kingston.
The Kingston first-team played well but failed to score as Chichester constantly put them under pressure.

First-team coach, Besim Ali said: “When the opposition were out of position they got really tight to us, and they stopped us from playing at times.”

Chichester scored 10 minutes into the first half before scoring twice in 20 minutes in the second half.

The second goal was wonderfully worked as Chichester outplayed the defence while the third was a long-distance strike that took a deflection.

Ali said: “They found it quite easy to play one-twos around us in the final third and they passed it into our box and got the shots off without us blocking the shot or blocking the cross or stopping the pass going forward.”

Midfielder Jacob Harder said: “They wanted the ball and they worked as a team. I don’t think they were better in playing and possession as we had 60 per cent of the possession, but we didn’t create any chances.”

Kingston struggled to get momentum in the first half but was the better team towards the end of the second half.

Ali said: “I’m disappointed with the result, but I’m happy with the way the players were creating the chances the way they did.”

Harder said: “They just kept on working defensively and sometimes defence wins the games, and this is just the basics, and they were better than us at the basics. Simple as that.”

Kingston was denied a consolation goal towards the end of the game as Chichester cleared the ball off the line. This result means the next game is a must-win for Kingston in the league as they reach the half-way mark.

Ali said: “The team needs to come out much stronger. We need to use this game as some sort of lift to progress as the next game is really important.”

He added: “I think in the future if we use this game as an example to learn how to get tight and work on that in training, we will be able to progress and maybe get a bit more success out in games.”

Harder said: “We have the capability in the team to do a lot better. We just didn’t bring it on the pitch today.”