Game over for Kingston Cougar crest

Written by Victoria Armstrong on November 2 2014

The iconic Kingston Cougars logo is set to be scrapped as part of a re-branding scheme within the next two years, marking the end of an era for thousands of KU students.

The logo, featuring a cougar’s head with three black stripes on its cheek, has been the Kingston Cougar’s logo for the last four years, and is featured on the sports kits of a range of Cougar clubs.

A KUSU spokesman denied claims the logo change had anything to do with a possible copyright issue involving a commercial firm.

“Any suggestion that copyright action is likely to be filed against the Kingston University Students’ Union, which owns the Cougar logo, is completely incorrect,” he said. 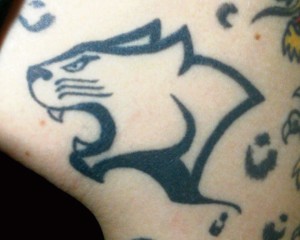 “The Kingston Cougar logo is, in fact, being updated by the KUSU sports office as part of a project to bring a contemporary, fresh look to our sports clubs and premises.”

A third-year student and KU sports team senior committee member said the rebranding had been announced at the annual Sports Working Active Group meeting last week, and the change was due to a company claiming copyright of the logo.

“We were told that due to a company having copyright of the logo, we would have to come up with a completely different one,” said the committee member who attended the meeting.

“We weren’t expecting that at all, we usually just talk about tour or plan Cougar Chaos events,” she said.

It is understood the logo will not be on any new kit that is offered to students for sale, although existing kit can still be bought and worn.

Third-year dance and drama student and cheerleader for the Kingston Cougars Eleanor Murray said she would be sad to see the logo replaced and she was concerned about the cost of the rebranding.

“I have always liked the Kingston Cougar logo and it will be a shame to change it,” she said.

“People may not be able to afford to buy new kits just for the sake of a new logo. We have the Cougar logo on our training uniforms and hoodies.”

Students have spent thousands on uniforms and other kit with the emblem – while many have had the image tattooed on to themselves.

Former KU student and vice president of the women’s football team, Becky Tansey, said she was angry to hear the Cougars would be changing their logo – after she tattooed the Cougar logo on her buttock.

She said: “They can’t do this, I have it on my body. Plus, we’re Cougars and this is our logo.”

Third-year KU student and women’s football captain Bauke Danielle Schram, who had the Cougars logo tattooed on her left foot earlier this year, said the logo had been an important part of her time at KU.

“Obviously I am not happy with it, especially since I have a tattoo of the Cougar logo on my foot. It has been very iconic for the university,” Schram said.

KU recent graduate Rosie Hilton, who was the president of the Cougar’s women’s football team for two years and tattooed the Cougar emblem to her arm, said she felt the logo change would mean the end for the Cougars, but she would never regret her tattoo.

“The logo resembles my time university life and it will be an end of an era for the people who were a cougar at the time the logo was around,” she said. 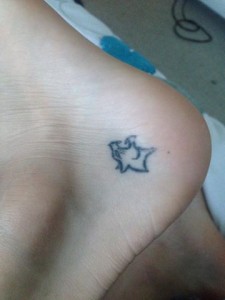 Lianne Davidson tattooed the Cougar logo to her ankle

Kingston graduate Lianne Davidson made the Cougar logo a permanent part of her body by tattooing it to her ankle while on tour with her football team in Spain in April this year.

“This logo represents Kingston and all my memories from University so I am not too bothered about it changing,” she said.

The KUSU spokesman added the students would be given a chance to participate in choosing the new logo through a competition.

“KUSU is working with students and a local company to develop this project and is currently reviewing some initial design concepts they have put forward,” he said.

“We will shortly be launching a project to call on students to help with the re-design process by submitting their own ideas of what the logo should look like for consideration.

“Students will then have a chance to vote on a final shortlist of possible designs.”

The logo is featured on jackets, shorts, backpacks, trackpants, hoodies, duffle bags and socks and all merchandise with the Cougar logo can still be purchased from the Under Armour Teamsport’s website.