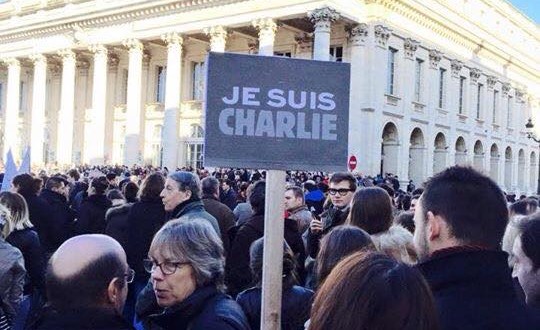 Crowds gather to protest across France. Photograph by Joseph Ward

Liberté, Egalité, Fraternité: What does the Charie Hebdo attack mean for the future of French politics?

An one-million-people strong crowd headed by world leaders gathered in cities around France yesterday, united in grief at the attacks in Paris, including world famous cartoonists at satirical publication Charlie Hebdo. People around the world used the slogan “Je Suis Charlie” on social media and at vigils, just as KU students are to gather on Tuesday evening to do the same. The phrase translates as “I Am Charlie”, in solidarity with the right of the journalists to express their views, however controversial, freely. 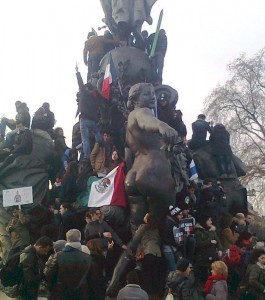 As a Kingston student whose family immigrated to France nearly a decade ago, I have been witness to the fraught racial and religious tension in what is otherwise an advanced, forward-thinking, western country. The numerous North Africans who come to make a better life in France for themselves and their families take the brunt of right-wing fear mongering amongst French nationals. During my time in Lyon on my ERASMUS exchange, I myself felt like an ‘outsider’ and gravitated towards other non-French students. My friendship group fast became Algerian nationals studying for PhDs who explained to me how they could only find menial jobs doing hotel nightshifts or as security guards, despite their obvious intelligence. Knowing how inclusive we are in the UK this new knowledge incensed me. The only explanation is that it comes down to colour and religion, racism and intolerance. 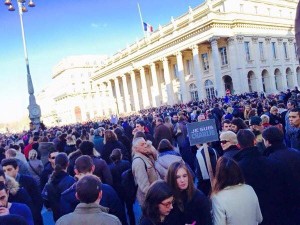 An estimated crowd of 100,000 at Place de la Comédie, Bordeaux on Sunday. Photograph by Joseph Ward.

The streets of Bordeaux yesterday, near my non-term time address, were unusually crowded for a Sunday morning as we struggled to drive through the city centre dubbed “petit Paris”. As disgusted as I am at this violation of freedom of speech and threat to our security, not only in France but around the world, this is a dangerous path for France to be treading. Leader of the extreme right-wing party Le Front National, Marine LePen, is gaining more and more support. I fear the events over the past few days will only deteriorate race relations in a country where there is already friction. Which in turn will foster support for an exclusive, closed off country which fears “otherness”, directly translating into votes for LePen.

After yesterday the French national anthem has left both a proud ringing in my ears and a bad taste in my mouth. Everyone stood yesterday in an emotional display of unity against terrorism and threat to free speech, however, when it comes down to political views, the very vocal French public are certainly not united.