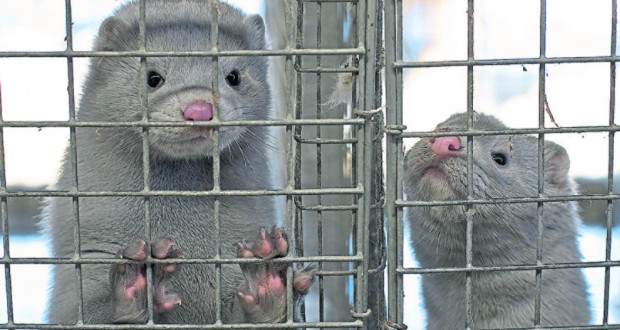 Written by Nancy Smith on February 7 2015

The use of fur in the final year fashion showcase has made Lush pull their sponsorship, re-igniting a fierce debate. So in the UK in 2015, why is fur really still such a must have?

Yearly, over 50 million animals are killed for the sole purpose of being bred and skinned in fur farms across the world. Minks, rabbits and foxes are treated this way; all in the name of fashion.

Some of these animals are in the estimated 16,000 farms in the European Union and Scandinavia.

In truth, the fur trade itself is not economically sound either. The fur of any animal used for fashion is not a by-product of world meat consumption as the carcass is simply disposed of after being skinned. So not only is it a cruel and unnecessary practice, it’s wasteful.

Yet, fur still has consumers hooked and Harrods is a great place to ‘shop till you drop’. There is so much to choose, from a fox scarf for £200 to a full white mink gilet (whatever that is) for £6,500.

The culture of wearing fur garments is a peculiar concept exclusively for the rich and the famous; the upper-class idiosyncratic fashion staple. Realistically though, the vast majority of the UK population has no allure or aspiration to own such a thing.

So what a few highly-educated and innovative Kingston fashion students are doing creating designs using fur is contentious. What furs are they using and why?

Due to their media silence these fundamental questions remained unanswered and their essential side of the debate is untold, but it is exhausting coming back to this debate again and again.

In this forward thinking and ethically minded decade what would generate more respect and admiration (especially from Lush) is designs that echo this reality. Using sustainably-sourced, ecological materials could be one thing.

Imagine a line of clothes where the designer could trace back their entire supply chain with complete transparency, for once. The customer would know truthfully that their clothes were free from corruption, labour exploitation and un-ethical behaviour.

Or what if a designer worked closely with global cooperatives, helping to ensure the continuation of the fair trade movement and fair pay? Instead of contributing to a mark-up of items dearer than a cotton farmer’s yearly salary or a fur farmer’s for that matter!

This approach to fashion design becoming the norm sometimes seems a life time away when some of the new generation of UK designers are adding animal fuel to the fire as they crawl back subserviently to the archaic use of fur.

I was under the impression that fashion design was about innovation, originality and challenge. Doesn’t this make fur seem a bit….safe?

They develop their designs; it would appear, unaffected by the UK ban on fur farms of any animal in 2000 under the Fur Farming (Prohibition) Act. This law enforced 15 years ago echo’s the thought that, for the majority of the UK population, fur clothing and needless animal cruelty is ‘so last season’ and that faux fur or even no fur is obviously the new black, or whatever the cliché terminology is.

Designers should stop pandering to a privileged minority who desire fur as they only exacerbate the damage it is causing. Damage such as high profile sponsors pulling out of shows, for example.

The fashion students will undoubtedly find another sponsor without such a strong and loyal ethical barometer as Lush. But their collaboration could have been something great, an indicator that fashion design was moving in a new, ethically minded direction.

For now however the final year showcase is a reminder that sadly, in the name of fashion, fur is still ‘fabulous’.

Read more here about Lush’s decision to pull out of the Kingston fashion show.