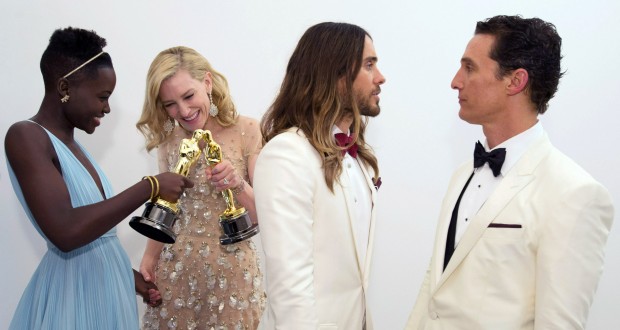 We are coming close to the world famous award ceremony that, let’s not lie, we all pay attention to.

The Oscar Academy Awards have caused quite the buzz this year, as the nominations revealed a disturbing lack of diversity. For the second time in almost 20 years all of the nominated actors and actresses were white, and among the screenwriters, directors and cinematographers nominated, there are no women.

The January announcement caused a stir on Twitter, prompting the #OscarsSoWhite hashtag where users expressed their discontent. Some noted the situation of having a black woman as president of the Academy and following last year’s success stories like actress Lupita Nyong’o, were disappointed in the apparent relapse from the Academy Awards in recognising talent from all races.

The real question here is: Who is surprised? Hollywood has always been dominated by white males. Only in the last few years have we seen a tendency for actors and women in the industry to stand up and request scripts with strong female characters and demand equality in the business. Cate Blanchett‘s acceptance speech at last years Oscars, where she won Best Actress for Blue Jasmine, went viral: “Those of us in the industry who are still foolishly clinging to the idea that female films with women at the center are niche experiences. They are not. Audiences want to see them and, in fact, they earn money. The world is round, people.”

Blanchett was followed up through the year by Emma Watson, Zoe Saldana, Angelina Jolie and more, all speaking out towards equal pay and more female lead films. Similarly, Lupita Nyong’o and several of her colleagues have pointed out the lack of roles, not to mention lack of variety in roles, for non-white actors. Only this seems to have drowned in the idea that her award in itself is a cause for celebration. Racial equality has come so far that non-white actors can now win an Oscar and be recognised among their white colleagues.

Don’t get me wrong, it is a great thing, but it does feel like we are missing a step. Where is the fight for providing a larger variety of roles? What are the steps being taken towards lessening the obvious gap in the film industry between movies portraying white actors and people of colour?

The issue at hand is complicated. Perhaps the announcement would have passed by social media easier, were it not for the Academy’s apparent oversight of Selma, a movie retelling the story of Martin Luther King’s fight for equality and the civil-rights movement in Alabama. While the film itself was nominated for Best Picture, neither actor David Oyelowo, nor Director Ava DuVernay were given any recognition – adding to the tendency of gender and racial segregation within the film industry.

But were Oyelowo and DuVernay snubbed of their glory or were the other nominees simply better?

Of course, this is a discussion which can go on forever. There will always be different opinions on which film was better, which actor or actress best interpreted their role or which was the top screenplay. To get to the core of the problem here, we must look much deeper than the Academy’s opinions.

According to a report from the LA Times, published in 2012, the Academy voters are 94 per cent white, and 74 per cent male. Alarming statistics. Surely none of the prestigious voters purposefully chose to abandon all thoughts of nominating women or actors of colour, but the results show a very clear relation between the lack of diversity in the committee and in the results. And it has never been a secret that the ever popular “white privileged males” of the world struggle to see past their own noses to the actual problem. An ongoing argument against the worlds raging feminists is that there simply is no problem. Women do get to play in films, like men. They make a lot of money doing so, like men. Equality has been reached.

Not really. There are so many levels of cultural and historical discourses which contribute to what each person perceives as normal and how things should be. In order to see these preferences, it is required to step out of the comfort sone and analyse how and why we do and think in a certain way, compared to people from other historical and cultural backgrounds. This is why an open debate around topics like feminism and race is so important. It provides a space for development and growth.

It is disappointing to see such a prestigious organisation as The Academy and The Oscars not opening up for more people of colour and female actors to give their views. No one is right or wrong in this case. Perhaps Benedict Cumberbatch, Bradley Cooper, Eddie Redmayne, Michael Keaton and Steve Carell simply performed better than David Oyelowo. But it would be a lot easier to believe if the info-graphic over the past 88 years didn’t look like this: 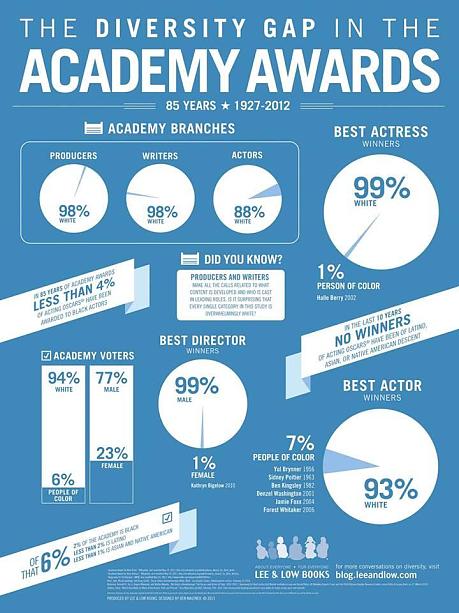