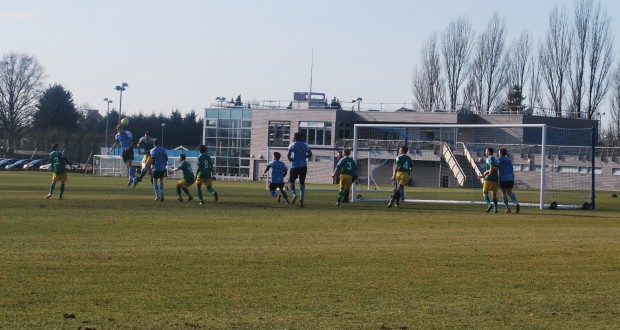 Kingston’s men’s football team were left bitterly disappointed after conceding a late goal against St George’s University, knocking them out of the competition.

A late goal in the second half shattered Kingston’s dreams of advancing to the semi-finals of the cup.

“It was unlucky,” said captain, Ed Hoar. “The first half it was more us, second half we were too slow to get out. We had tired legs. I wanted that final so bad. They’re 5b we’re 5c, they’re doing a bit better than us this season but it’s only by three points.”

Despite the disappointing defeat there were positives for the team to take from the game, especially from their first half performance.

Kingston put significant pressure on St George’s defence with good passing and sustained possession, creating plenty of opportunities for Kingston in the first half.

The first goal of the game came from Gareth Chendlik who ran into the right side of the penalty box and the put the ball across the goalkeeper into the far side of the goal from a tight angle.

Hoar said: “The goal from Gareth went very well, he didn’t really have any right shooting from there.”

Hoar also said that there were many good elements to Kingston’s performance.

He said: “Down the wings, especially first half, there were good triangles, one-twos but the second half we just got sluggish. The subs that came on, Louis Royden especially, he was solid [and] created a few opportunities, Wrighty as well, he had opportunities.”

The second half started slowly for Kingston as they faced intense pressure from St Georges and conceded two corners in the first few minutes and an injury to one of Kingston’s players.

Hoar said: “I wasn’t prepared for within two minutes one my star players ankles went and he had to go off. Then Knut, his hamstrings gone, bearing in mind that Alfie, myself and Gareth are muscling injuries. Just tired legs got the better of us, and chopping and changing having to make 4 subs out of 5 that sort of messes with our flow and rotation a bit.”

St George’s had many opportunities in the second period, scoring mid-way through the second half and another goal disallowed due to the offside rule. Kingston had many nervous moments when the ball was in their own box.

“We dallied about with it at the back, this ground it gave way so if you take a touch you slip and that the difference, their boys didn’t take the touch. They got rid of it and worked the wings.

“In the air they were vulnerable, especially first half they’d just try to get underneath it, no direction, they weren’t comfortable especially when you’e got someone like Gareth, Toby, Wrighty second half, big lads contesting with them and getting physical”

The late goal gave Kingston a sudden burst of energy that saw the majority of the team pushing in the remaining eight minutes for an equaliser that would take the game to extra time. Unfortunately it was too little too late and Kingston were eliminated.