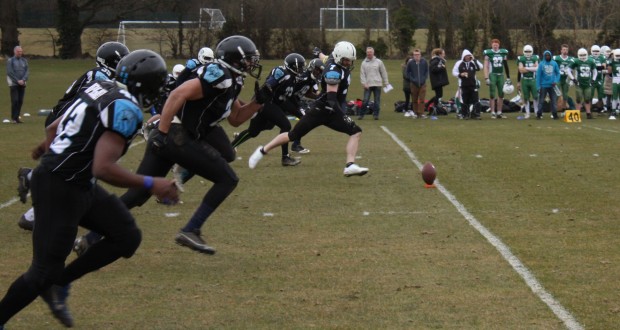 KU’s American football team beat the Welsh champions with a tireless team effort, securing the Cougars a place in the British national finals.

Kingston’s defence prevented the Titans, their Swansea rivals, from scoring a touchdown in the very last seconds of the game, securing the winning score of 12-7 to Kingston.

Coach Nate Wilson said: “The guys really stepped up, everyone contributed and did their job. They simply played, they really wanted it and played every single second of the game.

“We focused on getting all our fundamentals right, made sure we have all the basics sorted.”

Kingston’s running back Matthew Afobali scored the first touchdown in the second quarter, which put Kingston 6-0 up against the Titans.

For the majority of the first half, Kingston’s defence held the Swansea Titans on their own half and Kingston went into half time with a clean sheet.

AMF president Stuart Milloy said: “I think our defence is always good and when we keep up the pressure in offence as well, we get the results we want.”

In defence, Kenyeh Abbu and William Davis stood out as individual players but it was the whole defensive line which worked together well that dominated the Titans.

Kingston slipped a couple of minutes after half time, allowing the Titans to score a touchdown and throw salt on the wound with a kick, which put Swansea in the lead with 6-7.

Kingston climbed back up with vice president Alex Kharadi stealing yards for the Cougars, and Denapoli Williams stood out in his fighting role as quarterback.

Coach Wilson explained the success this way: “We watched videos of the other team to make sure we were prepared for this team specifically and we just drilled the guys and made sure they were prepared individually.”

Great pressure from Milloy and Timothy Thomas resulted in a come-back for Kingston in the second half as they put the Cougars up 12-7 against Swansea.

Kingston managed to keep this score for a long time, but the last seconds of the game were nerve-wrecking for both the team and spectators as the Titans pushed up to Kingston’s 10 yard line.

The Titans only needed to score one touchdown for them to take home a win to Swansea, but Kingston’s defence held the line and fought to the very last minute.

Kingston is playing local rivals Surrey in Hertfordshire to secure the national title.

“We’re going to keep doing what we are doing,” Wilson said. “We’re going to focus on the basics, focus on making sure we’re as prepared as we can be to secure we are 100 per cent ready to win the final.”