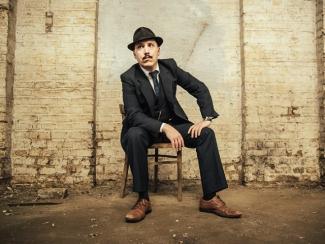 He said: "I have an old relationship with Banquet, I’ve played there instore maybe ten years ago so it’s very exciting to come back to the shop. I’m very excited that they’ll have me and I’m looking forward to seeing everyone."

Lenman said instore gigs were very important for music fans. "It’s the intimacy really isn’t it, that’s the main crux of it and people can see me close up  know that I’m not using magic or holographic imagery and that I really am playing those songs badly and people can get their stuff signed and I like to get stuff signed, it’s not always easy to do that at a show.

"I think it’s cool to use a record store as a multipurpose place so it's not somewhere where you have a one sided relationship with music. Places like Banquet doing instores means that it’s more of a hub for music in general, it becomes an interactive place and I think that’s great."

Originally from Camberley, Surrey, Lenman shared his fond memories of visiting Kingston as a child. He said: "You know when you’re a kid you have different places that mean different things and now you know they’re towns and they have stuff in them? When you go to Frimley that means the doctors, and when you go to Camberley that means the library. All these places have one thing you know. For me, Kingston as a kid was this amazing place where you could buy X-Men toys and there was no place else in our area where you could buy the X-Men toys. That’s what Kingston means to me. I still get that flush of excitement that maybe I’ll get to pick up a wolverine figure."

Lenman's 23-track album is split in two. One half will feature heavy aggressive metal while the other will have folk and jazz.

He said: "People have said they prefer one side to the other which is fair enough but I don’t think anyone said ‘Oh I don’t like this side or I don’t like that side'. So I  think people have taken it in their stride."

"I would certainly recommend every artist to experiment with their sound, but you don’t want to have too many albums like this. You’d feel a bit sick wouldn’t you? You’d get a bit queasy after a while. I certainly don’t plan to make any more records with the amount of diversity as this."

He has pursued a career in illustration following Reuben's hiatus in 2008 but found that he couldn't stop making music. He said: "Music is something that comes naturally to me. All these bits of songs wouldn't go away so I thought maybe if I finished them off they'd go away and stop spinning around and around in my head. When I finished them I thought let's record these because I wanted an opportunity to hang out with my friend Sean Genockey who produced the last Reuben record."

"Making a record is good a way as any to make sure we spend time together so we did that and when it was finished we thought, well, let's put it out. It was very organic."

Muscle Memory will be released on November 11.