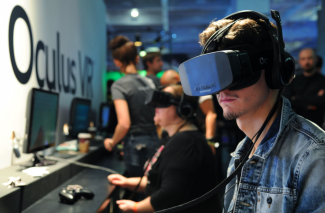 Virtual reality might sounds like something from a sci-fi movie, but next year you will be able to strap on a headset and experience video games like never before.

Remember James Cameron’s film Avatar, where humans hooked themselves up to machines so they could experience what their avatars did on a different planet?

We might not be able to explore distant planets yet, but you'll feel what it’s like to be inside a video game.

The Oculus Rift – which from afar looks like a black scuba mask – promises to drag you into your favourite video games.

You put the headset and headphones on, and in an instant, you’re on a rollercoaster, climbing your way slowly to the top, looking around, and taking in the scenery.

You reach the top and start plummeting down and your stomach starts tightening, just like it would in real life.

A scream might even leave your lips, because despite the poor graphics, the Oculus Rift delivers what it promises – the feeling of being inside a game.

The depth of vision, headphones blocking out any sounds from the outside, and the ability to look around while using the controls to move is an incredible experience.

Seeing fully-grown men dodging spaceship bullets by twisting their heads violently is hilarious, and I can’t help but think back to playing The Sims and watching my characters strap on headsets of their own and laughing at how ridiculous they looked.

Getting to try out a demo, where I floated through the solar system, was just as much fun.

Unfortunately, I was not able to try it.

It was in 2012 that Palmer Luckey formed Oculus VR and raised £1.5 million through a Kickstarter campaign, giving him the opportunity to make the headset with his team.

The company says that when it is released to the public, the Oculus Rift will be cheap, have better graphics, and a more polished look.

Which games the Oculus Rift will support, however, is still uncertain.

Luckey recently said that the Xbox One and Playstation 4 might be too limited technically for what they have planned.

Whether or not this has something to do with rumours of Sony and Microsoft working on VR-headsets of their own is still uncertain.

Oculus Rift will be released to the public in 2014