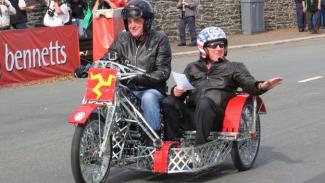 A team of engineers at Kingston University missed out on credit for work they did for James May on his recent show ‘Toy Stories’.

Course director of the School of Mechanical and Automotive Engineering, Paul Brandon, was approached by the BBC team in June 2013, where he was asked to help design a full-size motorcycle made completely from Meccano.

“I emailed the company and said it was absolutely outrageous, and they said ‘the programme had a lot of information in it and we didn’t have time to put your staff in,’ but that doesn’t excuse them not giving us a credit in the end,” said Brandon.

The show which was aired on BBC2 on January 3 saw May, and fellow TV presenter Oz Clarke with a team of engineers, excluding Kingston staff, complete the 38 mile course, despite having to overcome a series of mechanical issues.

“I thought it was disgraceful, as they didn’t cover any of the footage from Kingston,” said Brandon.

May and his team arrived at Roehampton Vale campus in August last year, four days before they were scheduled to fly out to the Isle of Man to ride the bike.

“I said to them, well you’ve not got much time, because it takes an awful long time to do all this stuff. They hadn’t tested anything; they had no idea whether or not it would work.”

Surprised to have seen what the engineering campus had on offer, May was desperate to get into the workshop and start using the machines.

Brandon explained working with the charismatic Top Gear presenter was “no different to working on a project with a student.”

“I don’t get star stuck, I’m not interested in who they are or what they do,” he said.

Because the bike held an abnormal amount of weight, Brandon realised that what May had planned to do was not going to work.

As an alternative Kingston staff advised May on a plan B for getting round the tricky parts of course, due to originally running off Meccano’s small electric motors.

“I know full well it would not have worked if they had not come here,” said Brandon.

With the lack of accreditation in the episode Brandon said that he will be much more hesitant with a production company in the future.