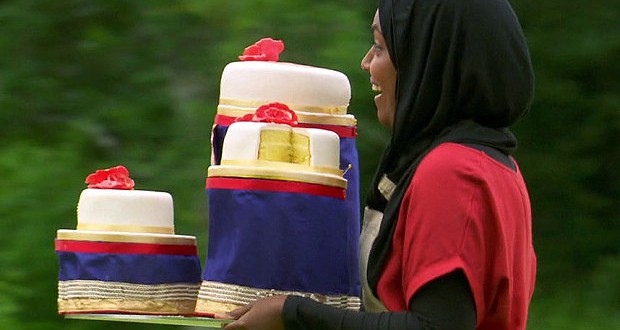 British Bake Off winner praised by the Muslim community

Written by Harriet King on October 8 2015

The 30-year-old from Leeds has been hailed as an inspiration by British Muslims, and was also backed by the Prime Minister.

Before her appearance on the show Nadiya told the new issue of the Radio Times: “Originally, I was a bit nervous that perhaps people would look at me, a Muslim in a headscarf, and wonder if I could bake.”

First year biomedical student Mudan Elmi, who is a member of KU Muslim society, said: “I don’t blame her for being apprehensive about going on the show. With all the negativity about Islam on the media, she must have received some sort of negative comment which made her hesitant. I think she just wanted to prove she was human.

“I was so pleased she won – it’s not every day you see Muslim women on these kinds of shows, she really stood out and her winning cake was so beautiful.”

After winning, Nadiya told the audience she was overwhelmed by the positive feedback she received and that it revealed how accepting the British society is of different cultures and religions.

Nadiya, the child of two Bangladeshi migrants, said that she hoped her victory proved that she was ‘just as British as anyone else’. She said: “Just because I’m not a stereotypical British person, it doesn’t mean that I am not into bunting, cake and tea.”

The cake that led her victory was a lemon drizzle wedding cake, decorated with a sari in the Union Jack colours to add a touch from both cultures. Nadiya said how she never had her own wedding cake when she married her husband Abdal, and that that they finally ‘got their wedding cake after all’.

First year forensic science student, Sahra Dahir, who is also a member of KU Muslim society said: “I think she just wanted to be seen as a woman who can bake, not just as a Muslim in a headscarf.”

See below for a delicious Muslim baking recipe from the Muslim Vibe website: 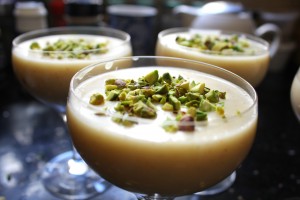 Muhallabia – Milk Pudding
Ingredients
• 2 cups milk
• 3 tablespoons sugar
• 2 tablespoons corn starch (Maizena)
• 1/2 tsp rose water
• Toppings: nuts, jam, fruit, honey, etc.
Method:
1. Pour 2 cups of cold milk in a saucepan. Add 3 tablespoons of sugar and 2 tablespoons of corn starch also called Maizena.
Mix with a wooden spoon until all the lumps are dissolved.
2. Set your stove to medium heat, and bring the milk to a boiling point while stirring constantly. You will notice that the milk mixture gets thicker as it gets hotter.
When the milk mixture reaches a boiling point, add ½ teaspoon of rose water.
Continue cooking the mixture for another 2-3 minutes.
3. Pour the milk mixture in canisters, bowls, or even tall classes. Let the pudding sit on the counter until it reaches room temperature, then place it in the fridge for a few hours before serving.
And that’s it! You can eat this pudding with fruit, jam, or any other topping of your choice.