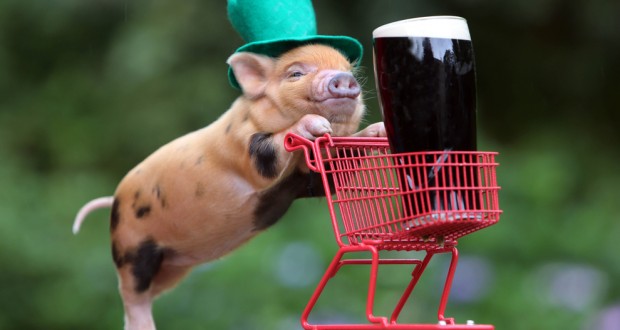 Each year on March 17, millions of people deck themselves up in green attire, attend big parades and drink lots of beer, all in the name of an old Irish Saint. But what’s the history of this emerald-hued holiday, and why do we celebrate it with shamrocks and alcohol?

He may be known as the Apostle of Ireland, but Saint Patrick was actually born in Roman Britain at the end of the 4th century AD. It wasn’t until about 16 years later that he was captured and taken to Ireland where he spent six years in slavery herding sheep.

This isn’t the only lie we’ve been told about Paddy though. It turns out his real name was actually Maewyn Succat. Happy St. Maewyn’s Day, we guess…

2. Green is actually the new blue

Blue was the colour originally associated with St. Patrick and artwork often depicts Ireland’s patron Saint wearing blue garments. It is thought that the shift to green happened due to Ireland’s popular nickname, ‘The Emerald Isle’.

3. There are more Irish in the US than in Ireland

A total of 34.7 million US residents claim Irish ancestry, which is more than seven times the population of Ireland itself.

4. A great day for Guinness

An estimated 13 million pints of Guinness are consumed around the world on March 17, almost twice the amount sold on an average day.

5. The shamrock wasn’t always so lucky

St. Patrick originally used a shamrock to preach about the Holy Trinity. He would use a three-leafed shamrock to illustrate how the Father, Son and Holy Spirit could be separate entities yet one in the same. Today, however, the shamrock is seen as a symbol of good luck.

6. Good luck finding one though…

According to National Geographic, the odds of finding a four-leaf clover on your first try are one in 10,000.