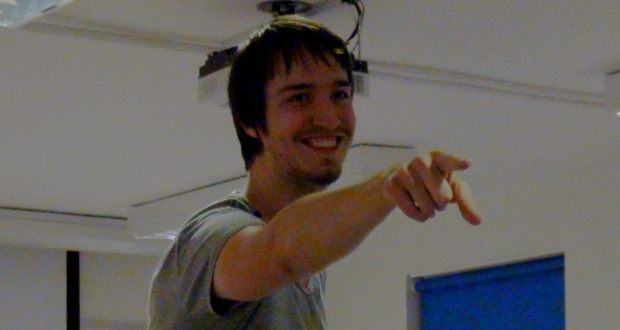 Written by Evelina Grechenko on December 12 2016

Have you heard about a mysterious world of improvisation, where every sound is based on emotion and every gesture creates a new piece of music?

Soundpainting is a modern art, based on sign language and created to control improvisation in music, mainly used by musical professionals as a performance tool to link different pieces of music and to create crossover music.

The creative music experimentation reached Kingston University in 2011 and now the KU music society has its own soundpainting ensemble.

“It is very liberating feeling,” said drama and music student Geert Rigters. “You work together closely with the ensemble and there is something very satisfying about the ensemble producing the effect you want.”

Both the soundpainter and the ensemble use who, what, where and how to help guide each other through the performance.

“The improvisation is very free because instead of having to come up with all stuff on your own you have got someone there to guide you,” said Geert, who is president of the KU music society. “It is more relaxed than full improvisation.”

The sign language which is used in soundpainting has links from other sign languages, but is not directly connected to them.

The very early signs were created to tell simple words such as improvise, develop, goodly, badly, on, off.

“When I came into contact, three years ago, with soundpainting, we only had 2000 signs,” said 20-year-old soundpainter Geert. “It grows every year. We get more signs because we find new things we want to be able to say to the ensemble.”

Soundpainting is also used in schools to help children make music, allowing them to discover that it does not require too much skill to create simple music that sounds pleasant.

“I use it to communicate with a head of department who is our teacher,” said Geert. “We talk with it because it is an easy way to communicate simple ideas.”