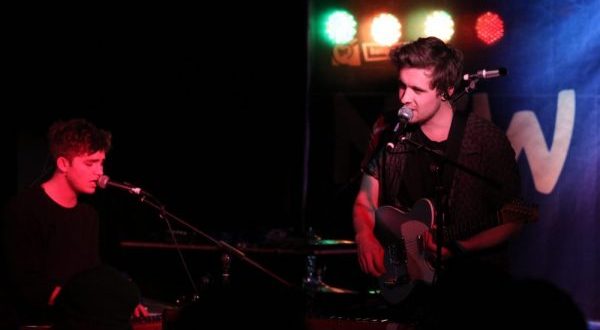 Written by Sunniva Knutsen on February 5 2017

New Slang introduced Aquilo and Toothless to the indie pop scene at New Slang on Thursday, where they debuted their first albums.

Starting off the show was synth-duo Aquilo and their album Silhouettes, serving up soft electronic sounds that mixed magically with lead singer Tom Higham’s emotional vocals.

The Silverdale duo, consisting of lead vocalist and guitarist Tom, 25, and Ben Fletcher, 21, on piano, has gained recognition since they released their first singles “Calling me” and “You there” in 2013.

They even gained a spot at Glastonbury Festival in 2014 after being mentioned in The Guardian and The BBC, despite saying they never intended to play their music live.

The crowd was entranced as they opened with “Human”, an atmospheric song with slow electronic rhythms and soft piano notes that bounced off the walls inside The Hippodrome.

During their set, the band jokingly claimed they lacked some preparation when they had to start over in the beginning of ”Sorry”. “We are very nervous,” Fletcher said with a cheeky smile.

The Island Records-signed band ended their somewhat short set of six songs with Silhouettes, appropriately the name of their debut album, which would released the following day.

Aquilo was unapologetic about their emotional pop-electronic set.

But despite hitting some snags here and there such as having to start a song over and hitting some wrong notes, it was a strong performance, and the crowd seemed unable to drag their eyes away from the colourfully lit stage.

Next up was the pop-debut Toothless, kicking the show off with Charon, a soft opening number with smooth strumming and a voice comparable to the likes of Passenger and Iron&Wine’s Sam Beam.

The songs hinted at several genres including folk, electronica and indie-rock, rooting in Nash’s background as bassist for London-based Bombay Bicycle Club, which he was part of from 2008 until 2014.

The band has released four albums, with So Long, See You Tomorrow topping UK charts in 2014.

During the set the songs had a tendency to overlap and sound quite similar. All were based in upbeat drums mixed with a light guitar and storming synthesised electronics.

The Sirens, a song which guest features The Staves on the record version, was a surprising and welcome change of sound.

The song started off with a slow, steady drum beat with Nash’s voice going lower than it had previously, before it went up towards the chorus and a female voice joined in.

The song has more subtle hints of the whimsical and electronic side of Toothless’s sound.

The artists performed their album’s single, Sisyphus, which was one of the more upbeat songs on the album.

It communicated hope and motivation in contrast to many of the other songs, which carried more of a melancholy and serious character.

Both Silhouettes and The Pace of the Passing were released on January 27 and are available for sale and on Spotify.