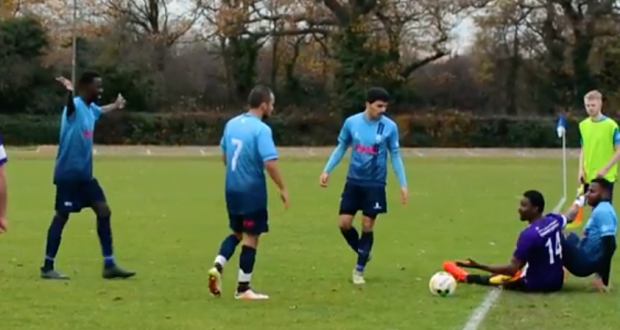 Jonah Ross is brought down in a physical encounter against Brighton"s fourth team. Photo: Sunniva Kolostyak.

The Cougars could have won by a much bigger margin with an array of chances being wasted in a physical encounter, but captain Greg Potts was still delighted with the win.

“It was a very good first half,” Potts said. “We had so many chances, but the finishing was good and Gurpz and Santi did well with their goals.

“But with those other chances I thought we could have got more men in there when we were attacking the box and scored a few more.”

The game got off to the perfect start for the home side as Tatla fired home the opener barely two minutes into the match.

The striker collected a loose ball on the edge of the Brighton box and fired past the despairing goalkeeper, to ensure his return to the squad was marked with a goal.

Tatla nearly made it 2-0 minutes later, but his flicked header drifted harmlessly over the bar after a good cross from right-back Pranav Thapa.

Brighton could have been level soon after as JJ Daniels found himself through on goal after a melee in midfield.

The striker fired the ball home only to be greeted by an offside flag, much to his annoyance.

Kingston continued to push for a second and it finally came 10 minutes before half-time.

After a period of pressure down the left wing, Hadi Habboushi’s pass squirmed its way through to Navarro who made no mistake when one-on-one with the goalkeeper, firing into the bottom corner with help from the post.

It should have been 4-0 by the time the half-time whistle went, but Kingston continued to be wasteful in front of goal.

First Tatla flicked his shot wide of the goal after being sent through by Navarro’s chipped through ball, before Sesay prodded wide when one-on-one with the goalkeeper.

As the second half got underway tempers began to flare within the Brighton team, with a host of rash challenges inflicted on the Cougars.

First midfielder Jaeden Potts found himself in a skirmish with the Brighton defence after being kicked repeatedly on the left hand side before finally being awarded a free-kick.

Greg Potts also found himself on the end of a number of late tackles, with the referee seemingly keen to brandish as few cards as possible.

But the first real chance of the second half fell to Brighton as a long ball over the top sent James Morgan through on the Kingston goal, but his finish was tame and the ball was easily cleared.

From then on it was all Kingston.

Left-back Jonah Ross found himself through on goal after a brilliant run, but his shot was smothered by a mix of goalkeeper and defender from a tight angle.

Yaw Ofosu then missed a glorious chance to make it 3-0, fluffing his lines when presented with a free header from Navarro’s corner, with the centre-back perhaps surprised to have received such a chance just 10-yards from goal.

Tatla also had two chances to add to his tally.

First he found himself one-one-one with the goalkeeper after charging down a defensive clearance, but a heavy touch gave the Brighton man time to close him down and snuff out the chance.

Navarro’s cross after a quickly taken free-kick should have also led to a Tatla goal, but the striker misjudged the flight of the ball, missing what could have been a free header.

“Everyone did a great job,” Potts told the River after the game.

“[The] Second half was slow and we didn’t get playing like we wanted to, but [I am] very pleased with how we defended and ground out the win.”

“Dylan [Moore] came in for his first start and I thought he had a very good game.”

After beating Imperial College London 4-1 in their last match Kingston have now won back-to-back games for the first time this season.

Next week they travel to the London School of Economics, who beat the Cougars on the opening day of the season.