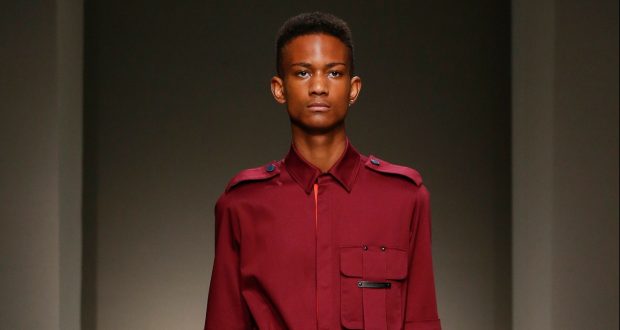 A KU student who was left homeless when he was kicked out of his family home has found fame on the catwalk after being scouted by a modelling agent.

Alexandru Sones-Dawkins, 19, spent almost nine months staying on friends’ sofas and sleeping on buses before he was spotted at Reading Festival in August 2016.

Since then he has walked the runway at Milan Fashion Week for designers such as Versace and is now the poster boy for the United Colours of Benetton Spring/Summer 2018 campaign.

“It feels surreal when I go to the Benetton on Oxford Street and see my face in the window. It’s crazy,” Sones-Dawkins said.

“I’m a model, I’m up and coming, I have had a rough past but I am definitely moving past it,” he added.

The media and communications student, who lived with his grandparents in Canada until he was 16 years old, returned to London and attended The Brit School, a performing arts and technology school in Croydon.

He became homeless after an argument with his mother when she asked him to leave the family home on the day he finished his AS exams in 2016.

“That was the first time I ever lived with her in my life but it just fell apart after a year,” said Sones-Dawkins.

“I wanted to go to raves and be out all night and she wasn’t really feeling it so it just didn’t really work out.”

He spent his homeless nights at overnight raves or sleeping on family and friend’s sofas.

“That summer I was homeless was a bit edgy for me as I was heavy on the squat rave drum and bass scene.

“When I had exhausted all of my welcome privileges with family, I had built up a good circle of friends so I would rotate between them

“I took homelessness as my first independence but I just wouldn’t go back to such inconsistent living now.”

The model, who now lives in Clapham, juggles his university degree and modelling career.

He flies back and forth from Milan to walk in shows and shoot campaigns.

“I remember one Tuesday I had uni, Tuesday night I flew to Milan and Wednesday was my kind of day off and that is when I shot the United Colours of Benetton campaign.

“Then on Wednesday night I flew back to London and went back to classes on the Thursday.

Sones-Dawkins said he was proud of his work at fashion week and revealed that he had a tattoo of the date of his first runway appearance on his chest.

“I was excited and nervous when I did my first runway.

“Looking back I did awful so I had reason to be.

“But I’ve improved a lot though which is always good and in a way because I’m so self-critical it helps me to improve,” Sones-Dawkins added.

Although he has never been allowed to keep the clothes, he has been gifted a few accessories from the designers.

“The runway clothes I model are all a year in advance of them being made available for the public so they’re all kept and finalised.

“I kept an earring from the United Colours of Benetton campaign but wasn’t allowed to keep any of the clothes,” he added.

Sones-Dawkins said he has always wanted to be a model but just had not had the opportunity before.

“I used to watch America’s Next Top Model and be like ‘yeah I want to do that when I’m older.’

“So everyone knows I wanted to be a model I just never got the opportunity,” he added.

After sneaking into Reading Festival and being spotted by Next Management London he decided not to return to college to finish his A-Levels and chose to pursue his modelling career.

“When I got signed in Milan I had to choose: do I continue with my A-Levels that I wasn’t enjoying or do I try and pursue this career.

“So I chose to pursue it and I definitely don’t regret it.”

Sones-Dawkins said that despite his success as a model he still wanted to get a degree and so started the media and communications foundation course at Kingston in September 2017.

“There were a few areas I wanted to explore, so I didn’t just want to leave all my eggs in one basket.”

The student said he is looking to the future and hopes to continue modelling while he studies for his degree.

Although he cannot reveal too much about his upcoming projects he said he is planning to move to Milan in the summer for modelling work and hopes to put the acting skills he gained at The Brit School to good use on TV.