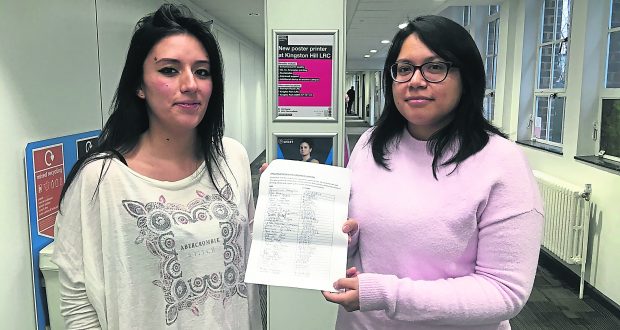 More than 100 KU students have signed a paper petition to nullify this year’s Student Election results amid claims of “foul-play” and “abuse”.

Andrea Sosa Moreno, 24, who ran for Penrhyn Road Officer, and Paola Sanchez Godenzi, 25, who ran for Kingston Hill Officer, created the petition calling for a vote of no-confidence and a public review of Student Union election procedures.

Sosa Moreno said: “In recent weeks, we have spoken to countless students who felt they were intimidated and bullied into voting for certain candidates.

“We had to put up with both sexist and racist abuse, with little response from the Union. This is clearly not good enough.”

The petition comes after the SU announced that the Kingston Hill and Knights Park elections would be subject to separate investigations.

The SU confirmed that its investigations into complaints about the Knights Park and Kingston Hill elections have now been dealt with and any candidates involved were cleared of wrongdoing following verification by the National Union of Students.

Sosa Moreno and Sanchez Godenzi want to change how the elections are run to secure justice in both present and future elections.

Having informed the SU of the petition a couple of days after the election, they were disappointed with the lack of response and tried to arrange a meeting about it.

The candidates said they tried to talk to one of the current SU Officers but “all of them were ‘busy’ and redirected us to the CEO”.

“I don’t feel that the SU are taking us seriously. They could have done more to help us, but I don’t feel like they are interested at all,” said Sosa Moreno.

“The Student Union must be accountable to its students, not the other way around.”

Several candidates have spoken to The River about the psychological stress, physical toll and “deep sacrifices” made by candidates.

Penrhyn Road Officer candidate Rachel Imlay, 19, told The River she did not even want the job at the end of the three-week election period.

“I cried almost every day for three weeks straight. I had opponents throwing shade and directing smear campaigns against me. I wasn’t eating or sleeping properly for all of voting week,” said Imlay.

“I’ve now been so ill from the physical toll it took on me, and the illness has affected my work and uni work.

“The elections made some students so miserable that by the end, some of us didn’t even want the job anymore. That says a lot.”

Penrhyn Road candidate Splash Morales Albarran added: “There was a bit of toxic competitiveness between candidates and that created a tense environment during elections week.”

More than 4,000 students voted in this year’s elections, which is more than double the turnout from last year and the highest ever turnout for the elections, according to figures by the Union’s marketing team.

Morales Albarran said: “I think that elections week should focus much more on the policies of the candidates and what they want rather than in them having to personally collect votes.

“That has made everything much more about the candidate’s skill to talk to people than how capable they could actually be at their job.”

Kamal Mohamed won the position of Penrhyn Road Officer and Whaqar Hussain will be the next Roehampton Vale Officer.

Upheld complaints about Kingston Hill candidates were posted on the Union’s website, including one complaint against Aditya Tandon saying that a “private halls manager sent an email out to all halls students requesting they voted for Aditya. Complaint upheld and warning received.”

The post continued: “Aditya says: “Sorry for this breach of regulation. We all make mistakes and we should be given a chance.”

Youssef El Hana, another KH candidate, was given a warning after breaching election rules by putting up posters in private retail shops.

According to the SU website: “Youssef says: “As your Kingston Hill candidate, I apologise for leaving my manifesto in a takeaway for you to read and inform yourselves. I was unaware it was against regulations and therefore please take this is as my apology.”

One third-year student told The River that he witnessed the winning Kingston Hill candidate Petar Lachev “forcing [his classmates] to put in their details to see if they had voted, then he said: ‘I’ll show you how to do it’. He then clicked on his name and, on some occasions, voted”.

The student said he had written a complaint to the Union during elections week to inform them of this behaviour but has not yet heard back from them.

The SU did not comment upon which specific candidates were being investigated.

Lachev told The River: “I have been the Officer for the past year and have many accomplishments that will become great legacies.

“This year many candidates ran across campuses and formed coalitions and it is normal to use such tactics against me since I know I helped hundreds of students during my time at Kingston.”

Patrick Tatarian, the current Roehampton Vale Officer, said: “A lot of people felt like their complaints weren’t being listened to, but at the same time I don’t think people knew what was actually needed as evidence to corroborate the complaints, resulting in a lot of “he said/she said” scenarios.

“People were breaking rules because they felt their complaints about other people weren’t being listened to, so they went by the logic of ‘if those people can get away with rule-breaking, why should I stick to the rules?’”

Elliot Spiers, who is running for Knights Park Officer, said that the reason for that investigation was due to an email sent by KU to Knights Park tutors which said a part of Spiers’ election manifesto outlining that Knights Park Bar could be closing, was false.

Spiers told The River that the intention of his manifesto was not to say that the bar was closing down, but to highlight that the bar is not on the new building plans for Knights Park.

Spiers said: “My whole campaign is that [the University] got rid of Penrhyn Road Bar, they’re getting rid of Roehampton Vale, now they’re also planning on getting rid of Knights Park Bar. Why shouldn’t I tell students about the business plans so I can try my best to stop this from happening?

“My tutor thought I was falsifying information. Obviously when [tutors] hear it from those higher up in the university, they’re going to believe them over me.

“I went to the person right at the top of the University to show him the building plans and get him to send out another email to tutors.”

The Union of Kingston Students website responded by saying: “We can confirm that, on this occasion, the University did not observe its normal principle to refrain from commenting on the student elections.”

Voting for the repeated Knights Park electon will now open from Monday March 12 until Wednesday March 14.

The results will be announced at 5pm in the SU on Thursday March 15.

A spokesperson for the Student Union told The River: “The Union takes feedback about the election process extremely seriously. As a matter of course the Union will be reviewing its policies along with its guidelines for candidates as a result of the concerns raised during this year’s elections.”

The SU posted a statement on its website saying that it was no longer able to consider any further complaints after the results had been verified by Kingston’s NUS Returning Officer.