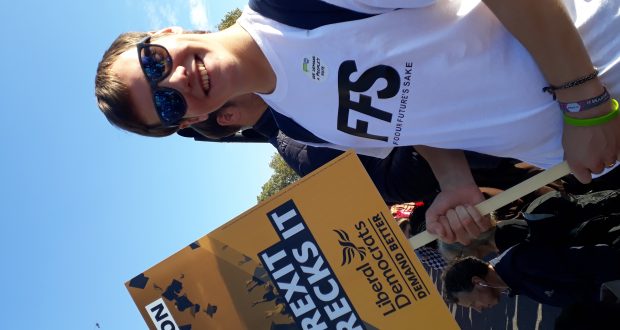 STUDENTS and locals from Kingston joined thousands at the Peoples vote march on Saturday to demand a say in the final Brexit deal.

A survey conducted by the River showed that three quarters of Kingston students want a second referendum.

Many students at the march were protesting how they had not been old enough to vote in the first referendum and so felt they did not get a say in their future.

“It’s one of those things where we didn’t get a say in the referendum but it’s our life it affects,” said first year student at Kingston school of art, Ania Levy. “The government probably won’t do anything about it. It’s better than sitting at home and complaining about it though. It’s kind of redundant to be passive.”

Peoples’ Vote UK confirmed that over half a million people attended the march, making it the biggest rally of the decade.

Opponents have said that the march was undemocratic, as the people have already had their say in the first referendum.

Theresa May was among those who said the first result of the 2016 referendum should be respected.

“So we need this say on the deal to make sure we get the best deal for our country. For students as well, so many weren’t old enough to vote and to have their right to live and work across Europe taken away from them without their consent.”

People at the march were concerned that Brexit is ruining relationships with other European countries.

Students at the march were particularly concerned how their right to live and work around Europe would be would be hindered after Brexit has taken place.

Folder-Hughes said: “When I talk to other students who have come from Europe, our image in Europe, it’s not necessarily the barriers the government will put up, it’s just that people don’t want to come here anymore. They don’t feel like it’s a welcome, tolerant, inclusive country and that’s really sad, because I do think it is still tolerant. Brexit is just one image,”

Local councillors from the Liberal Democrats also attended the march.

Kingston councillor Andreas Kirsch said: “It will massively impact their future. Many people who were involved in Brexit aren’t around anymore.

“But for these younger people, it’s their future, their lives. And their robbed of their ability to go to Europe to travel, to take all the benefits the European Union is offering. It’s quite sad that they got dropped of this. So I’m strongly in favour of getting all the young people involved in the new referendum.”