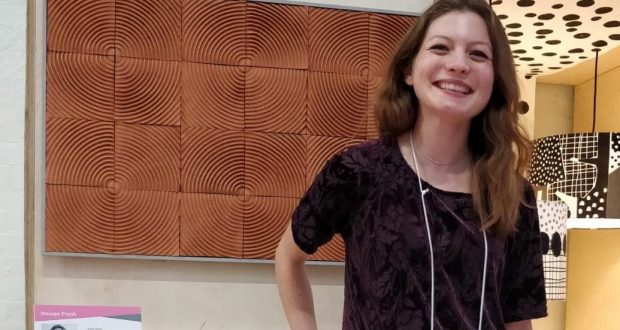 Poppy Pippin at the London Design Festival in September

Grand Designs’ Kevin McCloud selected a KU graduate as one of his top five green heroes of 2019 for her university project.

“The project addresses an environmental issue that affects the health and well-being of people living within the city,” said Pippin.

Pippin grew up in London and became concerned with the growing pollution in cities all over the world.

On her furniture design course, she decided to make a tile would accommodate moss growth.

“I started by observing how and where moss grows around the city; often in the crevices and cracks of absorbent materials, which gave me the idea to design outdoor tiles,” Pippin said.

Pippin was supported by the academic staff that helped her to develop the right pattern for the tiles.

“I ended up with a pattern that increases the tile’s surface area, has multiple indentations to encourage moss growth and could work well aesthetically outside,” said Pippin.

Pippin is very excited about the project being featured in Channel Four’s Grand Designs as it gives her the opportunity to expand it.

“From very early on, her projects revealed an interest into how product design can be utilised to improve environments for the people who use them every day,” Hill said.

Pippin hopes to see her tiles installed on a large-scale all-over London.

“It’s very exciting to be part of this upcoming generation of designers who are using design to develop solutions to environmental issues such as, pollution and waste, to encourage a more sustainable way of life,” said Pippin.