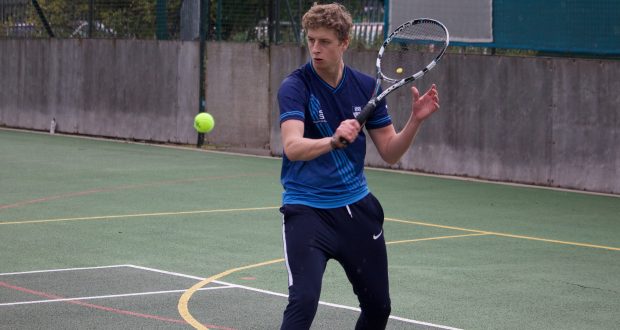 Written by Eddie Luchford on October 24 2019

Hertfordshire, who play a league above Kingston, won the first doubles match in empathetic style six love six-four against Kingston pairing Alexis Pivin and Loic David who were playing together for the first time.
The second doubles match was a much closer affair, Aidan Ellis and thirty-year-old architecture student Davis took Hertfordshire all the way, losing six four seven five in high quality and entertaining match.
“Considering the boys are mostly new and haven’t trained much together I was pleased with the performance, the motivation and tenacity shown was impressive”, tennis president Fareeha Chaudhrey said after the games.
Kingston’s only win of the day came in the singles, where Kingston’s number one seed Davis won the third set with a tiebreak having come back from losing the first set six three to restore pride for the Kingston team.
Alexis Pivin, making his debut on the day, lost in straight sets seven three six three in his singles match, despite the loss he gave an excellent account of himself and could well have won on another day.
Loic David also ran his opponent close, losing six three six seven in a fiercely competitive match where his Hertfordshire opponent struggled to deal with the Belgian Erasmus students ferocious serve.
However, it was Kingston’s second seed, Aidan Ellis who came the closest of the three losers, winning the first set six-four and then losing the second with the same scoreline in reverse. In student tennis, the final set is decided by a tiebreak which Aidan came agonisingly close to winning, eventually losing ten eight.
It’s back to the league next week as Kingston face UCL’s fifth team next Wednesday at Tolworth Court Sports Ground.
Hertfordshire kingston KU Tennis serve sport 2019-10-24
Eddie Luchford