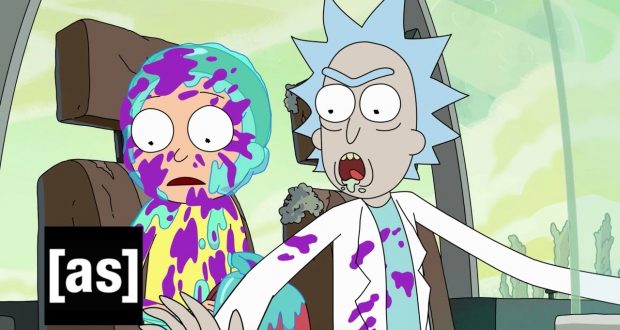 Watch Adult Swim's Rick and Morty on Channel 4 on the 20th of November! Photo:

Written by Jamie Eccleston on November 11 2019

Adult Swim US released episode one of the long awaited Rick and Morty season four on Sunday night last week. Whilst released solely in America, UK fans have less time to wait than initially thought.

Entitled Edge of Tomorty: Rick Die Rickpeat, the episode focuses on a seeing-your-own-death concept with dark sardonic twists and Nietzsche-like philosophical turns as you’d expect from any other Rick and Morty episode.

It’s consistent with previous seasons, being just as witty, charismatic and memorable as before. Each character retains the obvious continuation from the events of the last season without changing the narrative’s status quo. In fact, it may have improved it.

However, the episode felt overshadowed by the looming cloud of bad news that keeps growing over the series.

The final episode of the previous season was released on October 1 2017, two years and one month before the release of this episode (November 11). An incredibly long waiting time for devoted fans and production companies alike. So when we heard that the show will return with five episodes, of the promised ten, and then five more in early 2020, it’s safe to say the news was very disappointing.

Thankfully Channel 4, who own the rights to Rick and Morty in the UK, have moved forward the UK release from the initial early 2020 date, to November 20. This is after the large amount of backlash UK based Rick and Morty fans have unleashed. Even Netflix, who received world-wide rights to the first three seasons of the show, will not be able to add the fourth to their platform. This is owing to a deal producers Adult Swim and the streaming platform Hulu struck together giving them exclusive rights.

This, for a show that in October 2018 held an average viewership of 2.5 million viewers per episode, seems like an odd move. Whilst both Hulu and Adult Swim are owned in-part by Turner Broadcasting System, it seems strange not to push what Fortune statistically dubbed: “Millennials Favourite TV Show” to the bigger platforms for video streaming as they had done with the previous series.

According to Channel 4’s website: “Over 300 episodes of Adult Swim content will be made available at launch (February 2019), with hundreds more being added over the next three years.” Channel 4 acquired rights to seasons one to three in January earlier this year, and they will continue for the next three years.

The show’s return has had a little more of a disappointing impact on fans than expected. However, the episodes to come will no doubt be excellent. Episode one brought back everything we’ve missed from Rick and Morty over the past couple of years with even more action, adventure and absolute carnage. Whilst it isn’t ideal to split the series in half, it’s a small price to pay for such a fantastically funny, whimsically witty and satirically sarcastic show.