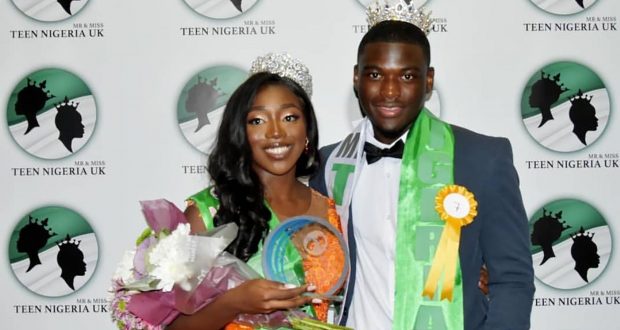 With a week to go until the Miss and Mr Teen Nigeria UK competition, whilst struggling under pressure from university and pageant planning, first-year computer science student David Amoko was close to dropping out of the running.

Amoko said: “That’s when I had just moved to uni, there was a lot of pressure so I called the organiser telling her I couldn’t do it anymore.”

The pageant final, which took place October 12 in Croydon, gave 14-19-year-old Nigerian-born UK residents a chance to showcase their creativity and ambitions.

Contestants created and presented proposals on an issue they wished to change within their community or society.

A panel of judges, including the current Miss Uganda UK, Miss London, Mr Congo UK, and the Youth Mayor of Croydon, chose the ultimate winners.

Maria Adejokun, 22, founder of Mr and Miss Teen Nigeria UK, said: “I thought instead of complaining about the issue at hand let me create a positive platform where youths from a Nigerian heritage can express their gifts and talents.”

Amoko was born in Yoruba, Nigeria and has lived in the UK for six years.

He said: “Winning this competition was not just for my value, it was to add to other people’s value too. For example, with this platform, I can bring people into fitness.

The 18-year-old student spoke about the need for people to go to the gym, not just for their physical fitness, but to help their mental health.

He also spoke about the awareness of knife crime in the area.

Amoko has plans to start his own fitness business after graduating and wants “to make an app that brings the world of science and fitness together to be used by one of the top tech companies.”

He won a £200 prize to help him with his start-up fitness business.

The training process leading up to the competition lasted six months and involved lots of preparation and time dedication, something which he struggled juggling university with.

The student said his mentor,  Mr Congo 2018-19, gave support with “training for our speeches, what we were going to do in our talent rounds, cultural rounds and catwalk practice” after telling him how he wished to drop out due to university pressure.

“When I first signed up for this, I didn’t see it as something big. I thought even if I’m not going to win, I’ll do it for the experience,” Amoko said.

Amoko also attributes his motivation to the support of family and friends. “One of my top supporters was my dad, and my friends pushed me, as did the organiser Maria because she sees us as her children.”

He said his studies were his “strongest value. Ever since I was young, computers are the only thing I could ever see myself going into.”

Amoko said to other students who also want to balance university life with their passions: ”My mentality was – its life, you just have to go through it because at the end of the tunnel there’s going to be a light, so just fight through it.

“Whatever you have a passion for set aside the time for it.”