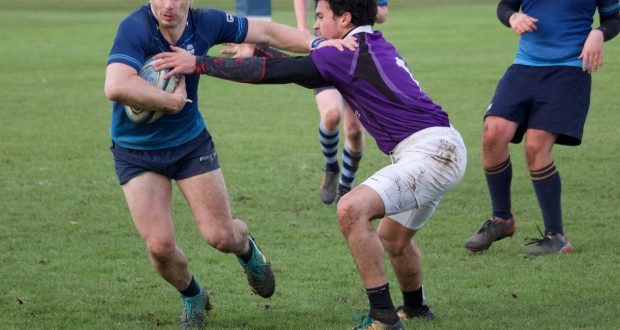 Kingston lose by one point as supporter gets spat on

Written by Eddie Luchford on November 20 2019

Kingston University Cougars suffered a heartbreaking 18-19 defeat to London School of Economics’ second team on Wednesday in a game overshadowed by fan conflict.

Kingston started the game strongly as they pushed LSE back against their own posts, only thwarted by a smart turnover and kick upfield from the LSE full-back.
The early pressure eventually paid dividends as Tom Kell broke the line with a smart dummy, showing impressive strength to will the ball over the line past a compact defensive line.
Kell took and missed the subsequent conversion and was unlucky not to extend the lead to 7 points.
LSE responded well to going behind, scoring a well-worked try and converting afterwards to put them in front by 2 points.
Following a short break in play due to cramp, Kingston was straight back on the front foot, working the ball well along the backline to Lucas Phair who put Kingston back in front on the stroke of half time.
Shortly after the restart, Tom Kell showed great composure to convert a penalty, putting Kingston in control of the tie with a 13-7 lead.
However the game was far from over, LSE seemed to wake up following the extension of Kingston’s lead and began their most dominant period of the game.
Relentless pressure and some poor defensive kicking from the Cougars gave them the initiative they needed, scoring a finely crafted try to take the score to KU 13 LSE 12.
LSE’s travelling support, who had been very vocal all game, choose this moment to cross the pitch and join the KU fans resulting in a melee, causing the game to be stopped after an LSE supporter wearing a suit was pushed into the mud.
After stern words from the LSE captain, the supporters fell quiet and play finally restarted.
Aggression levels rose following the altercation and it seemed to suit LSE, who scored their second try of the half and following an unmissable conversion had completed the comeback to lead 19-13.
But heated words continued to pass between fans, culminating in the game being stopped again as an LSE fan spat in the face of a Kingston supporter, resulting in all-out chaos as fans and players piled in to assail each other.
After a few minutes peace had been restored and this time it was Kingston who was channelling their aggression in the right way.
Adam Nilsson, who was Kingston’s best player on the day, powered through the LSE forwards with 5 minutes to go, scoring a try to take the score to 18-19.
This gave Kell the opportunity to seal the win for Kingston with a very difficult conversion, sadly he was unable to do so and after a very entertaining match on and off the pitch, Kingston had fallen short by one point to lose 19-18.
“My team showed great character and heart throughout the game”, said manager Jack Griffiths.
“I feel the way their fan spat in one of our fans’ face has no place in the game and shouldn’t be tolerated”.

KU Rugby is back in action next Wednesday, hoping to bounce back against UCL’s 2nd team away from home.