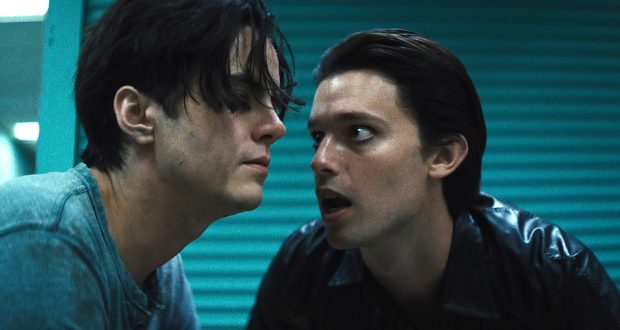 As a child, an imaginary friend can be a comforting necessity. But carried into adulthood, they can spell a recipe for disaster as is soon discovered in the new psychological horror film Daniel Isn’t Real.
The film has all the necessary ingredients of a mediocre coming-of-age psychological horror: a stereotypical and multifaceted mentality, standard genre tropes, fragmented editing and a troubled protagonist. However, director Adam Egypt Mortimer manages to execute a compelling film accompanied by an exceptional cast.

Struggling to deal with his parent’s divorce, things get worse for eight-year-old Luke (Griffin Robert Faulkner) who witnesses the aftermath of a mass shooting in a cafe and sees the blood-soaked body of the perpetrator. Almost like a parasite, Daniel (Nathan Chandler Reid) appears and befriends the innocent bystander.

Luke’s mother Claire (Mary Stuart Masterson) indulges his new imaginary friendship until things are taken too far, and she forces her son to banish him to an old doll’s house locked away in the attic.

Fast forward to his teenage years, Luke (Miles Robbins) is a mopey college student who resurrects Daniel (Patrick Schwarzenegger) in a bid to help him cope with the stress of caring for his schizophrenic mother. Daniel helps Luke to thrive socially, romantically, and academically under his guidance until he begins to resist his sinister orders which is when the real horror story begins.

Daniel isn’t real, or is he?

One of the most effective yet also confusing elements of the story is that the audience is unable to grasp whether Daniel is a figment of Luke’s imagination influenced by his mother’s schizophrenia or whether he is a demonic parasite searching for a host body to control.

Director and co-writer Mortimer said: “I thought about trauma, self- destruction, and demons — both personal demons and the fantastical ones.”

The cliché and, at times, predictable storyline can be forgiven by the impressive supernatural CGI and disturbing editing. SpectreVision, founded by Lord of the Rings’ actor Elijah Wood, is the force behind the warped demonic presence that appears throughout the film that torments Luke through swirling vortexes and fantastical dreamscapes.

The film’s undoubted success will heavily rely on the impeccable talents of the two central characters. Robbins perfectly captures Luke’s raw emotion highlighting the struggles and effect of a lack of paternal attention from a fatherless upbringing and being a carer for his volatile mother. Schwarzenegger excellently demonstrates restrained psychopathic tendencies which are unearthed by Daniel.