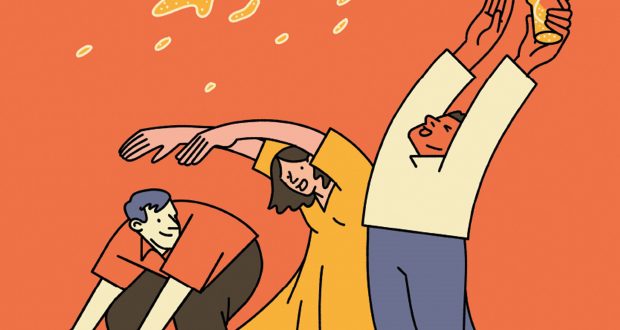 A Kingston alumnus gained a new perspective on his anti-drink driving illustrations for a government road safety campaign while learning how to drive.

Holme’s illustrations grew organically from the titles he was given, Mexican wave to crazy golf, and avoided gaining inspiration from other works to give his art a more spontaneous and “unique energy”.

The 26-year-old said: “It really just came from trying to embody a sense of movement, a particular interaction or a funny reaction that somebody might be having to this situation.”

THINK! began the Pint Block project which commissioned 60 artists to create 60 unique Pint Block illustrations for each of the 60 drivers killed or seriously injured a month in the UK.

The campaigns Mates Matter strategy focused on young males aged 17-24 who are four times more likely to be killed or seriously injured on the road.

Close to the target demographic, Holme said: “The whole time I was working on this I was doing driving lessons which was quite a funny perspective.

“In the first month, driving is the hardest thing in the world and the thought that anyone would be able to start a car having had a couple of drinks, let alone actually drive, is crazy.”

Holme had not had any direct experience with drink driving but thought it was interesting to be reading the rules of the road and the highway code while creating the illustration.

“Having literally just passed my driving test, I think it’s really crazy that anyone could get into the mindset where they think they’re skilled enough to be able to deal with all these situations that happen when you’re driving, and analyse and react quickly enough when you’re clearly going to be impaired in your reactions and decision making,” Holme continued.

After graduating in 2015, Holme is now a full-time freelance illustrator, and this was the first time he worked with a government department as a client.

Holme added: “It’s obviously really sad that it has that much of a human impact, but I think it speaks to the fact of how people take driving and travelling by car for granted.

“How quickly it becomes something that’s not a big deal even though you’re literally operating a really heavy deadly machine.”

Holme recalled why he avoided gaining inspiration from other artists: “Towards the end of being at university, I remember really getting into a bit of a rut, looking too much at other peoples’ works and then really measuring everything that I was producing against those standards.

“It started to make me second guess everything that I was doing,” he said.

Holme credited Kingston University for the problem solving and analytical skills necessary to complete his works.

“You can learn the techniques yourself on YouTube but the thinking process and the analytical eye that is much more difficult to self-teach, I definitely credit to my time at Kingston,” he said.