Written by Christopher Jutting on October 9 2014

A tomb-raiding antihero who likens himself to Kevin Bacon, a bomb-making raccoon and a walking tree with a heart of gold come together to defend the galaxy in what will be remembered as one of Marvel’s quirkiest – and funniest – action-thriller romps yet

Avengers Assemble, Captain America, Iron Man, Thor – Marvel’s film division has been on an impressive winning streak these past few years. You keep expecting them to slip up, to play the wrong hand, to go for broke when they should be dealing themselves out.

When Marvel announced Guardians of the Galaxy back in 2012, it seemed like the perfect opportunity for them to do just that. It was a gamble on everything that they had done before – mainly gritty, modernistic action – for them to suddenly come out with a comedy space thriller about an unlikely band of interplanetary heroes. The gamble worked. Guardians has grossed well over 640 million dollars worldwide since its release at the end of July.

The story is loosely based on Marvel’s 2008 comic series of the same name, although many of the characters have been around in the Marvel universe since the 1960s – Peter Quill (AKA Star-lord, played by Chris Pratt) became a member of the original Guardians comic series in 1976. The film’s villain, Ronan (Lee Pace), made his first appearance back in 1967 as part of the Fantastic Four comic. All the characters have been modernised and provided with new back-stories in keeping with Marvel’s new universe.

When Quill travels to the planet of Xandar to hawk a strange metal orb found in an abandoned temple on an abandoned planet, he finds himself thrown into a fight with two parties – one trying to bag the orb for Ronan, the other trying to kidnap him and claim the considerable bounty on his head. When they are captured and imprisoned by the planet’s police force, they must come together to stage a prison break, after which the ‘Guardians’ get together defeat the baddie and reclaim the orb, which turns out to be a powerful weapon.

While the storyline is recognisable and fairly predictable, it is the characters that make this film burn brighter than many of the other action outings we’ve seen this year. As out-there as Marvel has been in the past, it’s a testament to the ingenuity of writers Nicole Perlman (the first woman to get a writing credit on a Marvel flick) and James Gunn that they have managed to emotionally connect an audience to a morbidly cynical talking raccoon. Some of the best comedy of the film comes from Groot (Vin Diesel), a walking tree who can only express himself using three words and the odd inane smile. For a near-indestructible killing machine, the character has a surprising amount of humanity. 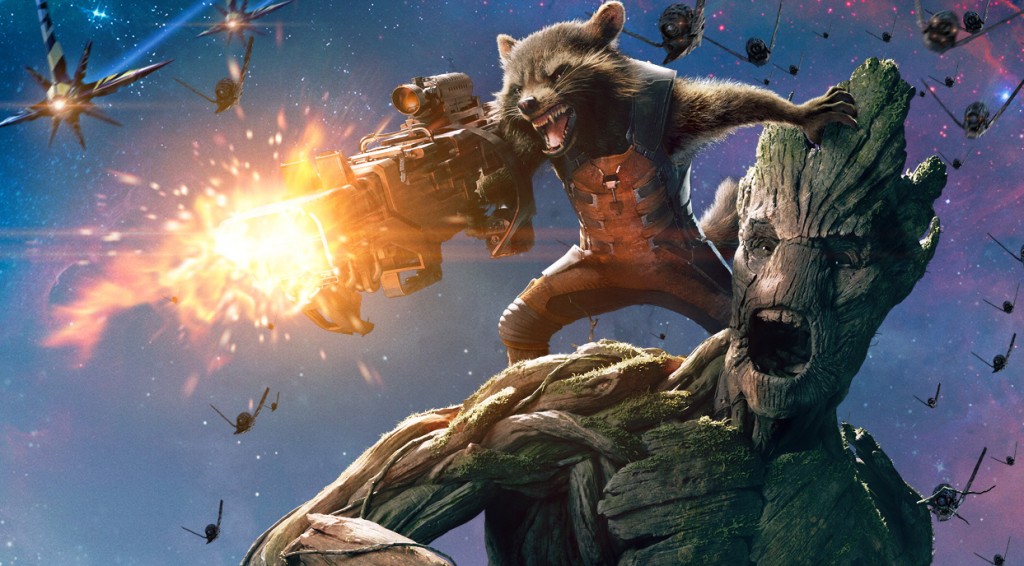 And then there’s Peter Quill, a man who is less than a hair’s breadth away from coming across as a complete a***hole for much of the film. However, a down-to-earth opening sequence puts paid to any negative feelings we might otherwise have had about him, firmly cementing his role as the saga’s conflicted anti-hero. Chris Pratt is a revelation as a 80’s disco music-loving, college-bachelor-on-a-spaceship character (“if you brought a UV light in here it would look like a Jackson Pollock painting”) and bounces perfectly off of Zoe Saldana’s hardened warrior-rebel personality as princess Gamora. Top that off with Dave Bautista’s portrayal of Drax the Destroyer, a revenge-driven heavy who is completely impervious to any kind of metaphorical speech, and you have a pretty enjoyable (and at times, surprising) sense of on-screen chemistry. Oh, and the CGI’s pretty good too.

Dare we hope for Guardians 2? Given the open ending and the through-the-roof ticket sales, I think we can assume that Marvel most certainly is.

Guardians of the Galaxy is set for release on DVD on December 9th nationwide.