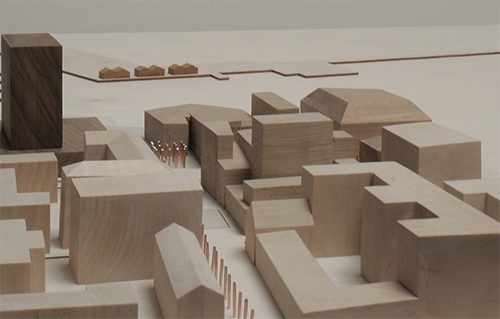 Model of Stormen prior to its construction [Kingston University Press]

Written by Samuel Millen-Cramer on January 26 2015

Head of Architecture at Kingston University, Daniel Rosbottom has had his work in Norway named ‘Best Building of 2014’ by Architects Journal (AJ).

The building, designed by DRDH Architects where Mr Rosbottom is one of the companies director, located in Bodø, Norway.

Oliver Wainwright, The Guardian’s architecture critic said this of DRDH’s work: “A subtle urban ensemble that riffs off its neighbours.”

The concert hall and library are located in the newly developed cultural quarter of the city which is centred around the harbour.

The project in Bodø was also used in the university’s submission to the Research Excellence Framework (REF) 2014, a scheme awarding the best research and practise linked with the UK’s universities.

Mr Rosbottom founded DRDH in 2000 with his partner and despite a relatively small portfolio of completed projects have been critically acclaimed numerous times, with its last notable achievement being named finalists in Architect of the Year in 2012.

But the six year project in Bodø secured its first award winning building when AJ announced their favourite work of the year in December.

Their reasons for selecting DRDH’s building included its “Smooth, off-white concrete facades” and “The neatest roof” they had ever seen.

Mr Rosbottom described the work as a “Total project” with DRDH being responsible for all aspects of the buildings finish, including involvements with furniture and graphic design.

The duel purpose building, known as Stormen sits on Bodø’s quay and compliments the city’s older off-white building and its other more natural surroundings.

When talking about the finish of the building, which features marble aggregate, Mr Rosbottom described the walls as: “Having the ability to capture the remarkable and ever changing luminescence of Bodø’s Arctic skies.”

DRDH’s work on Stormen was also commended by The Telegraph who featured the building in their top five buildings of 2014.