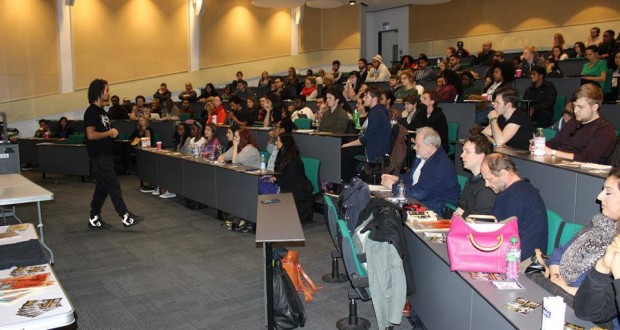 Renowned rapper and MOBO award winner Akala impressed the many KU students who turned up to his lecture on African history on Tuesday evening.

The lecture titled ‘Africa in History’ explored the idea that much of the continent’s history has been distorted over thousands of years by historians and Hollywood.

Leo Fitzpatrick, one of the students who attended the lecture, said:  “It was the most educational and energised lecture that I have had in my 3 years at Kingston. I wish he was a permanent lecturer.”

The lecture lasted for over two hours and ranged from ancient Egypt and slavery to obscure 16th century explorers and 13th century universities in Timbuktu.

President of the Luso Society, Rui Daniel Jaime, organised the lecture and said: “The lecture was about Africa in the World History. The content gave us a clear understanding of the contributions of Africa towards the development of the history of the world and civilisation.

“We also heard about imperialism and class. The main focus on Africa and Diasporic history and how the obscuring of past human possibilities affects our vision of today.”

The rapper focused on the misrepresentation of African history in the modern world by demonstrating how the Ancient Egyptians had advanced knowledge of phenomenons Europeans have claimed they invented. Akala said this varied from astrology, Pythagoras’ theorem prior to Pythagoras and a 365 day calendar prior to the modern Gregorian calendar.

KU student Joey Baker, who also attended the event, said: “I think the lecture was the best lecture I’ve had to date. It was the most profound, informative piece of teaching applied with the most passion I’ve seen for a subject, and the most qualitative information that I’ve experienced in the last five years.”

Baker said that he did not think Akala was attempting to teach those in attendance what to think, but rather that he was giving factual information from a multi-dimensional perspective. This, he said, was in order to reveal the social, economic and political factors that have effected mankind throughout history and the way they relate to each other.

Akala highlighted anomalies within history, and the evidence he provided through his presentation contradicted what is traditionally taught in schools and universities across the world. His lecture did not patronise those in attendance but urged them to question common held beliefs about history.

Baker added: “This was a pleasant surprise and not something usually done in education as it’s taught around a curriculum. I felt more free to learn and wanted to learn more, I was fixed for the whole hour and a half, he is a performer after all.

“Akala is a visionary teacher, a really good teacher with a good sense of humour and he has an amazing brain with the capacity to retain so much factual knowledge.

“There was no hierarchy to his practice, he comes from a humble position enriching people’s minds through his poetic words that make sense to the youth through explaining his own life.”

Baker urged anyone that has not seen Akala perform to go and see him.

Akala is currently touring around the UK.