It Follows was the breakout film from the Cannes Film Festival in 2014, labelled the “metaphorical coming-of-age” at its world premiere. Based in the suburbs of Detroit, the indie horror film is both original and refreshing.

The opening scenes depict a teen girl, fleeing her house petrified. Something is following her, something only a select few can see. Moments later we witness her as a helpless victim, covered in bruises and scratches, her leg in an awkward position.

Writer and director David Robert Mitchell pays homage to eighties classics of the genre, Halloween and Nightmare on Elm Street to name a few. The suspense is at times unbearable, but it is always worth the wait.

The plot is simple: girl dates boy. Girl sleeps with boy. Boy drugs girl, ties her to a wheelchair and forces her to watch a spine-chilling, naked woman appear out of nowhere and walk slowly towards them. Then boy disappears.

Reminiscent of his 2011 release The Myth of the American Sleepover, Mitchell captures the complex mindset of adolescent.

Jay, played by Maika Monroe, is then left to battle a curse that follows her no matter how far she runs. To make matter worse, it takes the shape of random people, and she is the only one who can see it.

Accompanied by her sister, her friend, and Paul, Jay’s childhood friend who is not-so-secretly in love with her, they set out to track down the curse, and hopefully destroy it. 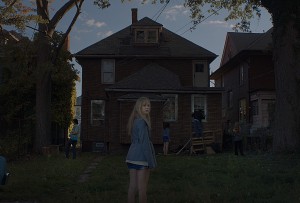 Mitchell’s use of superb cinematography, a wide range of angles and intense music is a breath of fresh air in a genre that has become more and more predictable over the past 20 years. There are some similarities to the Japanese movie Ringu, and the American remake The Ring, in the sense that there is a supernatural presence forcing the viewers to remain at the edge of their seats at all times.

The similarities also stretch to the passing on of the curse. Whoever catches the curse must pass it on to someone else or face a horrific death.

But, that is where the resemblance to the chilling horror of Ringu stops. To transmit the curse in It Follows, the victims must have sex with someone; sort of like a sexually transmitted disease.

There are a few blunders in the movie. The story lacks consistency at points, which would be sure to annoy the most experienced horror buffs. However, the brilliant use of original music and the artistic variation between hand-held camera and a tripod makes up for this.

The ending might leave you with a few unanswered questions, but more than once the hairs on the back of your neck will stand up; and the uncomfortable setting throughout the entire film will have you watching over your shoulder when leaving the cinema.

Mitchell has not tried to sugar coat anything and the chilling scenery accompanied by at times brilliant acting makes It Follows a must-see for anyone who fancies a good scare.