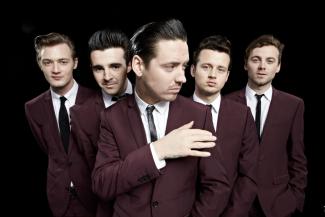 The Computers have revealed plans to release a new album late next year.

Drummer, Aiden Sinn said: “2014 should hopefully see the release of a new record by The Computers. We’ve got at least 10 to 13 songs in the pipeline so it’s just channelling them into something concrete. I think we’re going to be demoing early 2014, getting something out, if we can, by the summer, if we can’t definitely September.

“We’ll be doing all the usual stuff, playing lots of shows, all the festivals, going to Europe, putting on weight, getting older, losing more hair – that’s the way it is. Actually, we won’t be putting on any weight, we won’t lose anymore hair and we’ll be getting younger, that’s what 2014 will be, we’ll actually be getting younger.”

Elvis vs Elvis is a limited edition release which features covers of Elvis Presley and Elvis Costello. Aiden said: “Is there any name worth mentioning other than Elvis? Elvis Presley and Elvis Costello, two great kings of rock n’ roll. It was idea put forward by our label and manager and it was something that we thought about doing before as a band because we love obviously both Costello and Presley and it’s something also, fans of The Computers would quite like to hear because there’s obvious influences there.

“If you had Presley plus Costello you might get The Computers. I know on the individual pieces of music the sound is quite different but the ingredients are all the same and if people really understand The Computers. They’ll understand what we’re doing; it shouldn’t be shocking to anybody. We have covered Presley and Costello songs before. On our first single there’s a cover of Welcome to the Working Week and on the B-side to Music is Dead is Burning Love by Elvis Presley.”

Like most bands who venture into Kingston to gig, The Computers share a close relationship with Banquet Records. He said: “They do loads for us, they’re one of the best records shops there is. When I think of Kingston I just think of Banquet and that may be insulting to the rest of Kingston and I’m sorry for that.

“Banquet is just one example of having a relationship with a good independent record shop. It’s these places that you need in order to keep a really good local scene going.

“We did the Banquet Big Day Out I think last summer, that was brilliant that was a real nice return home. It was the first same day we got home from Georgia recording our new record and we got home all jet lagged, got a couple of hours sleep and it was actually one of the best shows, it was so much fun. We were on a weird high because we hadn’t been to bed.”

Their latest album Love Triangles Hate Squares was released in April this year. Online review website Any Decent Music claims they have ‘departed from their hardcore punk roots in favour of a more mainstream sound’. Aiden responded: “First of all, I know it’s objective but people can think what they like about the package but I never saw us as a hardcore punk band at all really and being fans of hardcore collectively as a band we know what it’s all about and I’ve never saw us as that. I saw The Computers as a weirdo garage punk band really, not hardcore though.

Punk is never ever confined by genre, that's not being punk

“The Computers were on this road and that was just further down it. We started at this point and I think one of the most important things to understand, when I think about people labelling any band especially punk, is never ever confined by genre or the music that people expect you to make, that’s not being punk.

“The Clash around ’81, ’82 realised that punk was in a decline and they moved on, they progressed. You gotta do whatever you gotta do to make the best with what you got. If that is taking over the world with The Magnificent Seven then do it and releasing Rock the Casbah. No one can ever tell me The Clash are not a punk band because I think they defined the word punk in terms of progression, evolution and fulfilling the desires of the world, not just one scene. I think it’s much more important to have a global view on things.

The Computers will play a special Christmas style show in their home town in Exeter on December 19. Their EP Elvis vs Elvis and their new album Love Triangles Hate Squares are both available from Banquet Records.