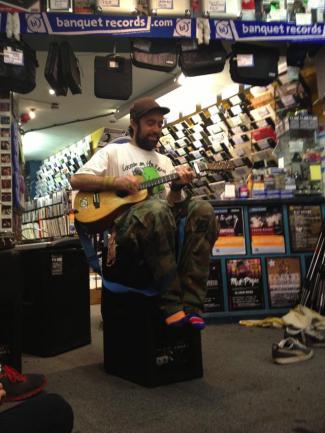 Self-confessed drunken folk musician Beans on Toast treated fans to a special rendition of his new album in Banquet Records on Monday. The crowd gathered around on the floor, as he got comfortable perched on a speaker, Heineken in hand with his shoes off.

Otherwise known as Jay, he has continued the trend of releasing an album on his birthday, making Giving Everything his fifth release to date.

“It falls into the natural progression as the festivals are sort of wrapping up towards September. I’m constantly thinking, right we need to get into the studio in September and it’s not that hard to put it out because once I’ve recorded it I’ll give it to Xtra Mile and that’s it! We’ll make a couple of videos and that’s where the birthday thing helps because it’s just like doing the same things at the same time. I turn to my girlfriend once the festivals are finished and it’s like right, it’s film-making time – what are we gonna make films about?”

He revealed that his girlfriend is a Kingston University graduate. She helps out in the production of his music videos.

Jay's newest video features him dancing in a forest and tree hugging.

Jay celebrated his album launch on Saturday night. He said: “As far as the night itself, it was good. I got pissed really early and I guess I see myself as a real arrogant prick on the day. I always think, what the hell am I doing trying to make everything so self-absorbed but hey, we keep on doing it.”

I like to think of the album as a collective

Giving Everything was released on Sunday. It features tracks tackling fracking, playing Glastonbury, Prince Harry and suffering from ‘post-festival blues’. He said: “I’m happy with this one and it just rolls out. In the grand scheme of things, releasing an album doesn’t really feel like the be-all and end-all for what I do. If anything, it just kind of flops out and everything just carries on, which I guess is not the way most people do it.

“It was produced by a guy called Mike Freear who works for a band called Slamboree who are a sort of techno rave outfit. It’s still a folk record but he’s a good friend, we collaborated together on other projects.

“It’s weird, my songs are so simple and the recording process never really lasts more than a couple of days. It would be quite easy to go into the studio, knock out a few tunes and just leave it like that. So each time, I try and take someone different with us into the studio to produce it.

"More often than not, it’s musicians rather than a record producer. I find that someone else will put their own input into it, which hopefully brings a little bit of difference to the songs from that album. I like to think of the album as a collective” 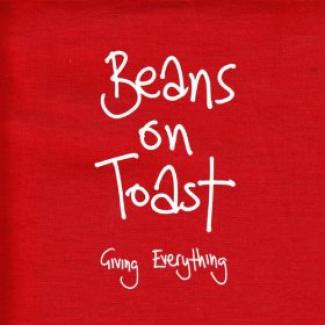 He expressed a great appreciation for the work that Banquet Records does for music in the local area and throughout the UK.

The last of ten record shops still left in the country

He said: "The Banquet guys really do a good job especially for a satellite town. What Banquet do here in Kingston with the record shops, the in-stores and club nights, is something that should be very appreciated, because seeing the bands they have coming in there are second to none and you know what, they’re the last of ten record shops still left in the country. I would bend over backwards for them, if they ask me to do something, I’ll do it.”

Jay just completed a seven-week UK tour. He enjoyed it so much, it felt like a holiday. He said: “Touring is very easy for me, I was touring with Bobby Banjo. It was just the two of us and we didn’t need to do any sound checks so we didn’t have to carry all the heavy stuff around. It’s basically like a holiday.

“The tour we were on was long but it was very well-organised so we basically had no more than a two-hour drive a day. If you think about it,  having a two-hour drive with nothing to do apart from that night and getting loads of free beer and having people clap at you, is like a fucking brilliant holiday!

It wasn’t tiring at all, we spent the days in butterfly sanctuaries drinking with new-found friends. I think a lot of the trails and tribulations of bands touring don’t count for us; we have an easy ride.”

A tour with folk/punk artist, Frank Turner is on the cards on February next year. Jay shares a close relationship with Turner, but he didn’t expect to play such large venues so soon after the summer tour.

He said: “I didn’t think I’d be doing arena tours any time soon. I’ve done so much with Frank, we’re good friends and he’s obviously a guy that’s rocking it while being down to earth at the same time. He always looks after me.

“I’ve toured the states with him in June and I’d like to think that I’ve got this gig off the back of the Wembley show, I took it in my stride, it was a great gig. When the tour was over he came up to me and told me that I was ‘arena-ready’.

“For a bit I was like: ‘did I get the leg-up because he’s a mate?’ But to be honest, I don’t really care as long as the leg is there. I think it’s a vibe thing too, like I’m well up for it. Tickets are already selling out the door for it so it’s gonna be seven or eight arena shows in a row so it’s gonna be amazing.”

He has stuck with independent label Xtra Mile from the very beginning. He said: “We have a very relaxed relationship; they came to me years ago a decision to put an album out. They have that kind of family vibe that I guess other independent labels strive for.

Giving Everythingis available to purchase from Banquet Records and Itunes.