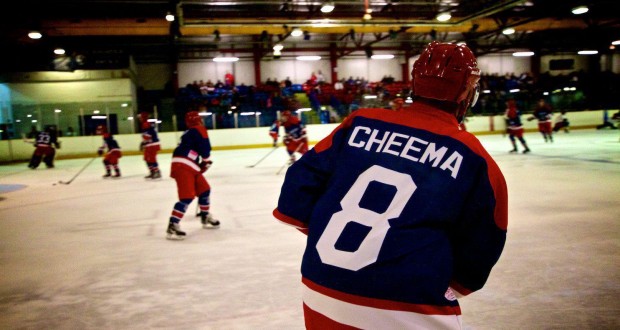 Sam Cheema is a semi-professional ice hockey player at KU and has recently earned himself an achievement level scholarship on the sports performance programme.

Cheema owes his love for the sport to the 1992 Disney film, Mighty Ducks. He said: “I owe my love all down to Emilio Estevez and Disney for what I could only describe now as the most life changing event to happen at such a young age.”

Cheema says that his ice hockey commitments dominate most of his days. Currently he is contracted to Milton Keynes, he trains late at night and has games every weekend, as well as the “dreaded” gym, which is a big part of his off-season regime. He is a defender and has played 10 matches this season while studying a degree in advertising at the same time.

Cheema said: “It’s not easy, but it means that you become time conscious and your management skills increase tenfold.”

Cheema is in his second year on the achievement level in the sports performance scholarship programme at Kingston for his ice hockey skills.

“It is a great honour to be recognised for your efforts and achievements in sport,” said Cheema. “By being a student athlete you lead a different university life to most and the program relieves some of the extrinsic pressures placed upon you.”

Cheema studies advertising in between his ice hockey commitments.

“Kingston Business school is becoming regarded as one of the best schools in London,” Cheema said. “I have been residing in New York during my off-seasons and as of September 2015 I will be playing, studying and continuing my work for the New York Rangers over there. It is an extremely exciting time and I have fallen in love with the city.”

However, Ice hockey has not always been easy for Cheema, and he admits that playing the sport has given him a positive outlook on life.

“Playing hockey for me has always been team first,” said Cheema. “My final two years for the Guildford program saw great adversity and great achievement. As a team and person we were dealt with a devastating blow of loosing one of our players and great friend to a freak accident. The way we conducted ourselves during this time and how we faced these hard times has given me the strength and knowledge to get through anything.”

Unfortunately Kingston University does not currently have an ice hockey team on its sports programme and Cheema does not expect there to be one any time soon.

“It would be extremely tough to facilitate a team at Kingston – I’m the only [ice hockey] athlete here, as far as I’m aware,” said Cheema. “However, a direct link with the other London University teams would be a big boost to roll out the sport. Hockey is costly on the other hand and I’m not sure halls residents will be able to endure the odour of the equipment.”

The best part of ice hockey according to Cheema is “in the space of 30 seconds you can be leading by two but go onto lose the game one minute later. It ebbs and flows, just like life.”